Headliner clips onto the bows.
I cleaned up the headline bow bracket with a bit of sandpaper. They look a bit dirty, but they are fine. The rust that was on them was from the bows, not the brackets.
Then I attached the little brackets to the bows. The 4×8 pop rivets where to long to fit into the smaller diameter pusher bows. They stood proud.
I searched several home improvement shops here in the area, but none of them had 4×4 mm pop rivets.
So, I took the pin out of a 4×8, sawed it in half, and put the pin back in. And voila…. 4×4 mm pop rivets.. But it was a bit time consuming sawing all those rivets in half.
But I got them all on. Note that only the pusher bows have the headliner brackets on them, the slider-bows don’t have any.

Assembling the bows.
Next job was to attach the cross braces to the bows. But I encountered a problem. The pop rivets DecoHaus delivered with the braces didn’t really fit.
These rivest where also 4×8 mm, which meant I had the same problem as with the headliner brackets. I had to saw them in half.
Also they didn’t fit next to each other for attaching the brace to the glider bow, where it uses two pop rivets. The edge of the rivet was too big, so I ended up using my normal 4×8 rivets.
Those rivets also overlap a little bit, but that’s exceptable and it was originally also like this .
On a couple of the braces I had to enlarge one the two holes (meant for attaching to the glider bow) a bit, otherwise the second pop rivet wouldn’t fit.

On the first aluminium bow, I put some tape on the underside of the brace, to prevent stainlesssteaal – aluminium corrosion. Sadly, I had to take the back off again later, more on that later…

Attaching the rubbber end caps, and the slider shoes.
Notice that the new slider shoes are a lot wider then the orignal one. But they did fit fine on the slider bracket.
The rubber end caps were the old ones, and went back on fine. But one was damaged. I don’t think you can get end caps like that anywere, so I improvised by wrapping the end in galvanizing rubber tape (which is excelent stuff!).
It works, and doesn’t look too bad, but it isn’t as nice as the original end cap. I hope it is obscured enough by the ragtop when opened, so it doesn’t stand out.

Getting the bows sliding nicely.
While test fitting the bows I noticed they didn’t slide very well. It turned out the new slider shoes were too wide.
I used a homemade bracket and a file to take some of the top, and I put an edge on the sides.
That made them slide better, but then I noticed the ends of the bows where touching the frame at some points with the rubber end caps. I never noticed this before (before dismantling it), but this prevented the bows from sliding freely.
I cautiously bend the ends a little bit upwards by putting the end in the (2 cm opened) vice, and using the leverage to bend them. I didn’t take pictures of this.
They now slide freely, but there is quite a bit of sideways play in them, and they can tilt a bit. I am not afraid of the sideways play, the old sliders have even more play. The tilt was probably present with the old sliders shoes too, but I never noticed it.
I hope this will work out when it’s all assembled.

Brace trouble and protection.
While test fitting the first bow (to see if the sides clear the frame), one of the braces just snapped. I wanted to lift it by lifting the pusher bow, and then it suddenly snapped.
I don’t think I was rude, while lifting it, but it snapped.. It might have had a weak spot.
Luckily I still had the old braces and most of them were still in good shape. So I cleaned two of them and repainted them. Then I replaced both braces with the old repainted ones.
I replaced both, because I was worried the other one could snap too. And when the first bow is installed, there is no way of replacing the brace, as the rivets are on top covered by the roof.
The old braces held up for 22 years, and still looked good, so I hope they will last another 22 years. And now I have one stainless steel one as a spare (along with the other old ones).

I also wrapped the end of the braces and the riveted part of the headliner brackets with galvanizing rubber tape. I want to be sure they will not cut into the fabric.
I did that to all the bows. 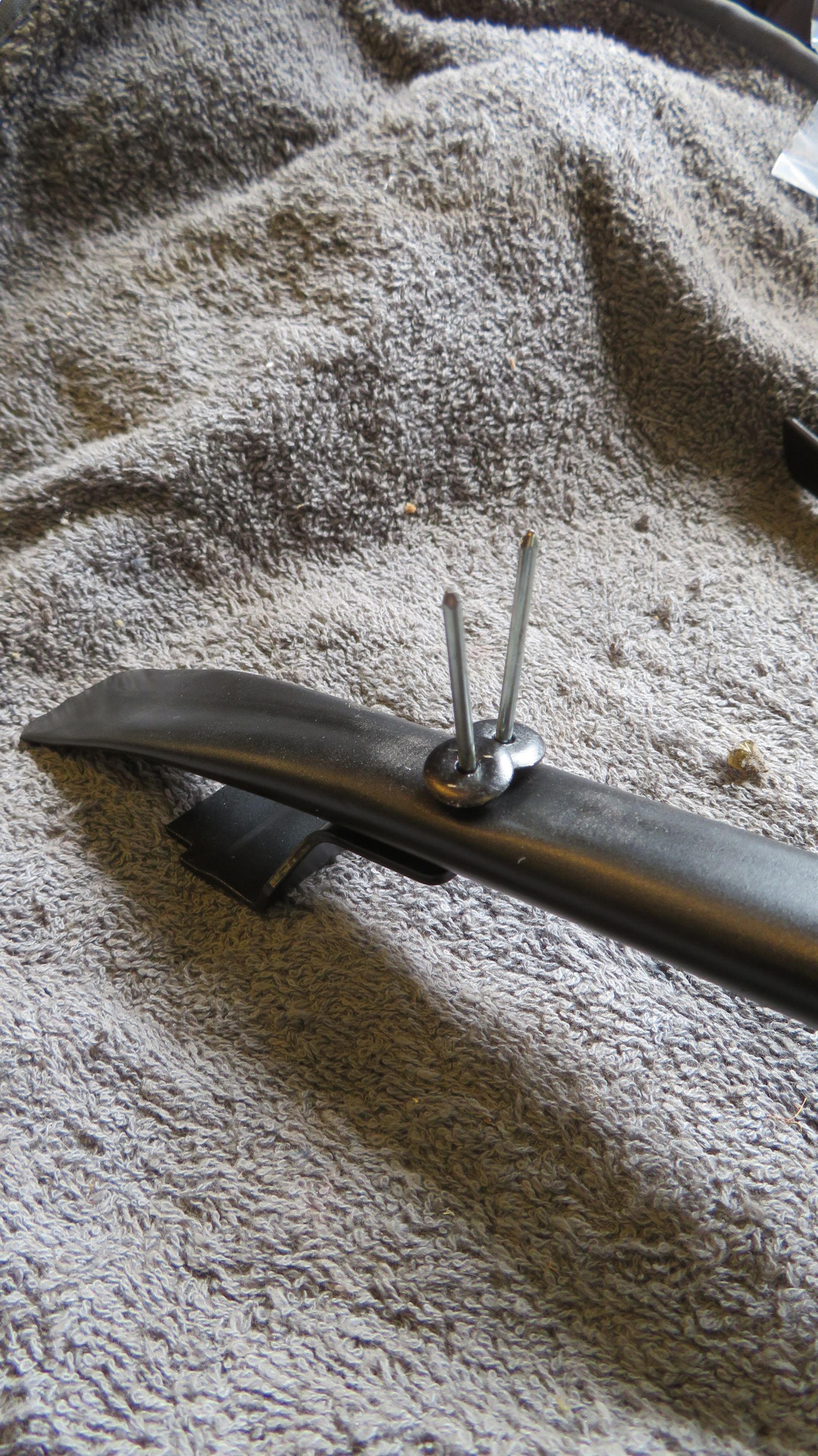 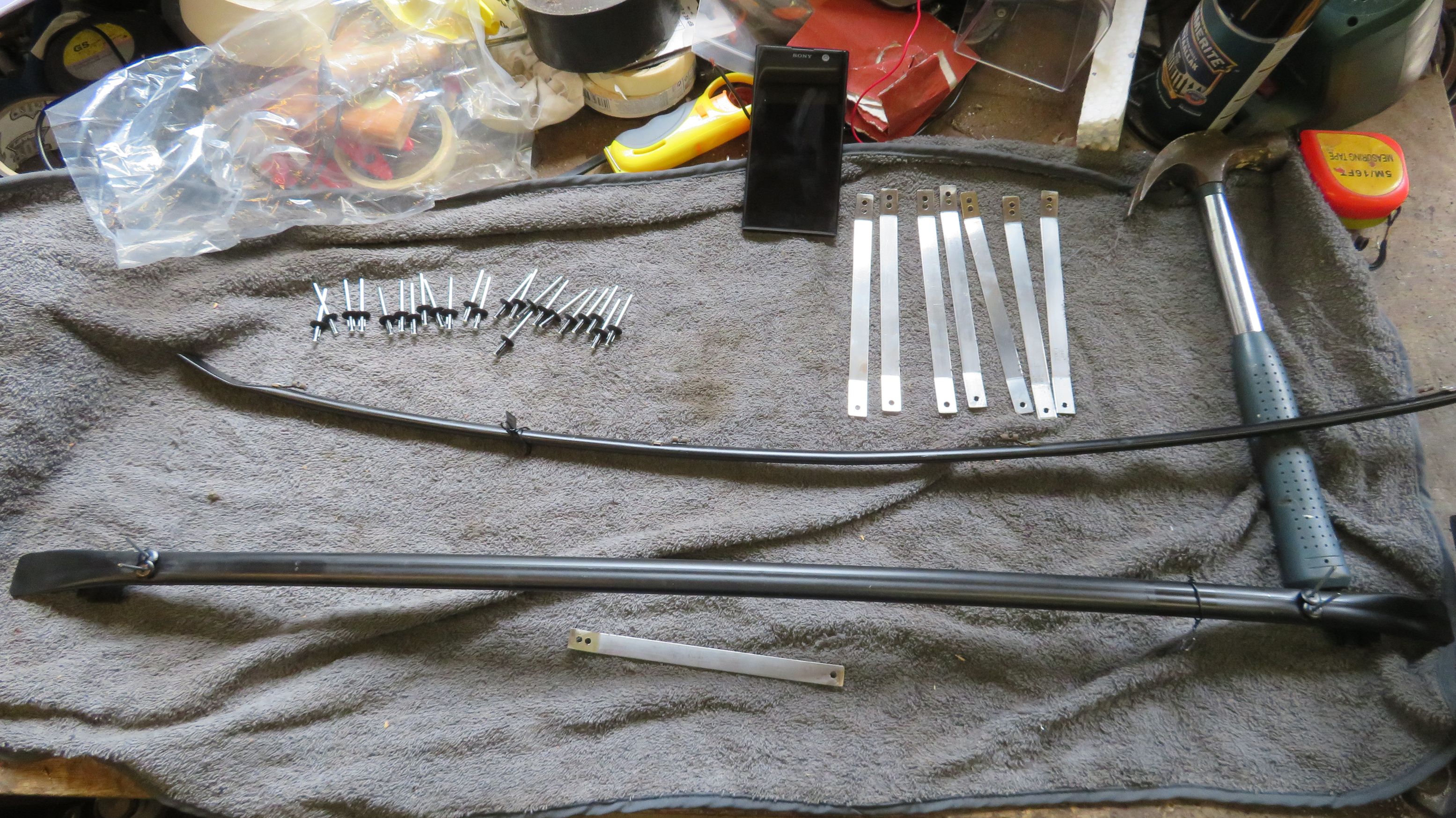 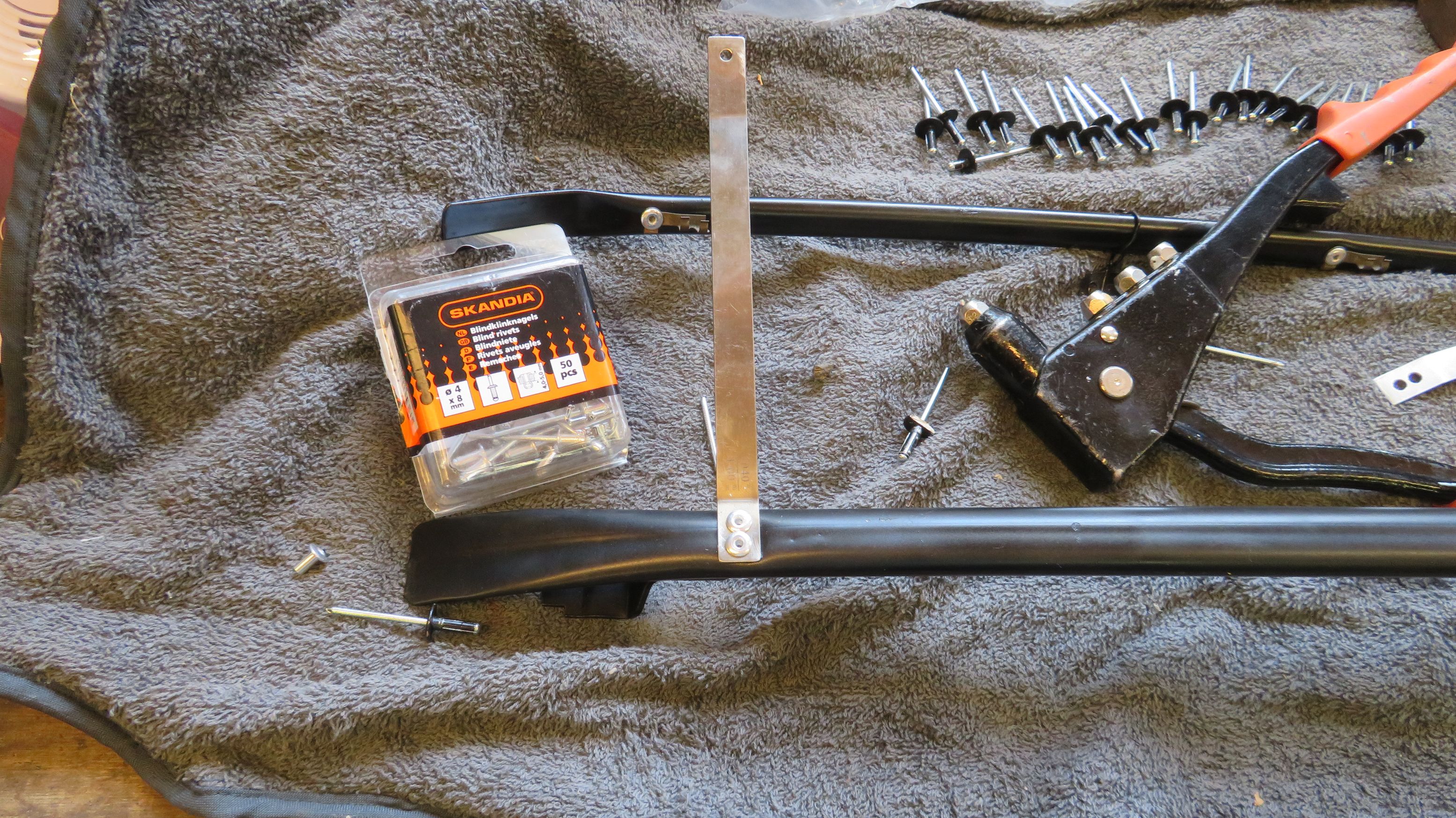 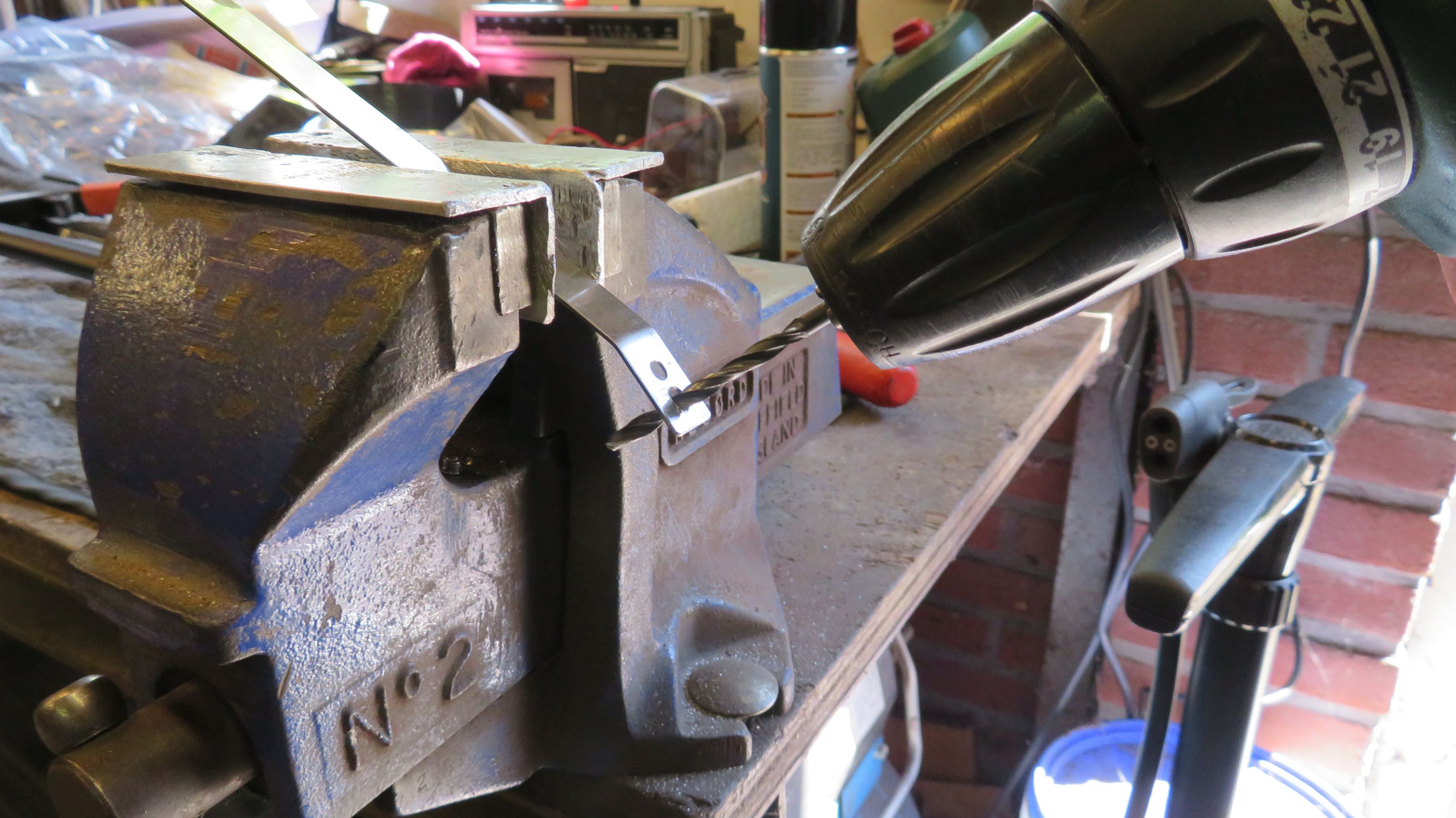 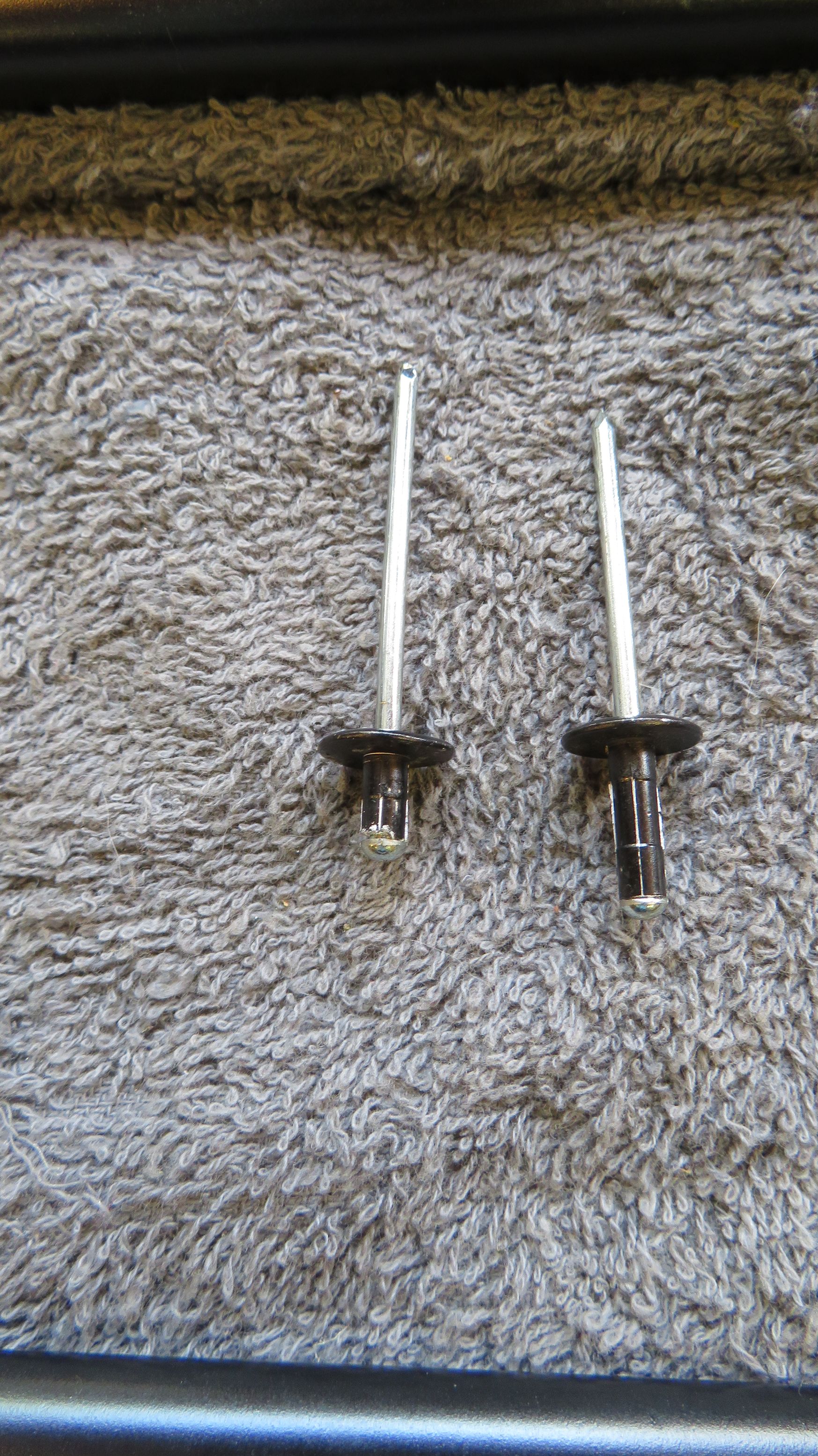 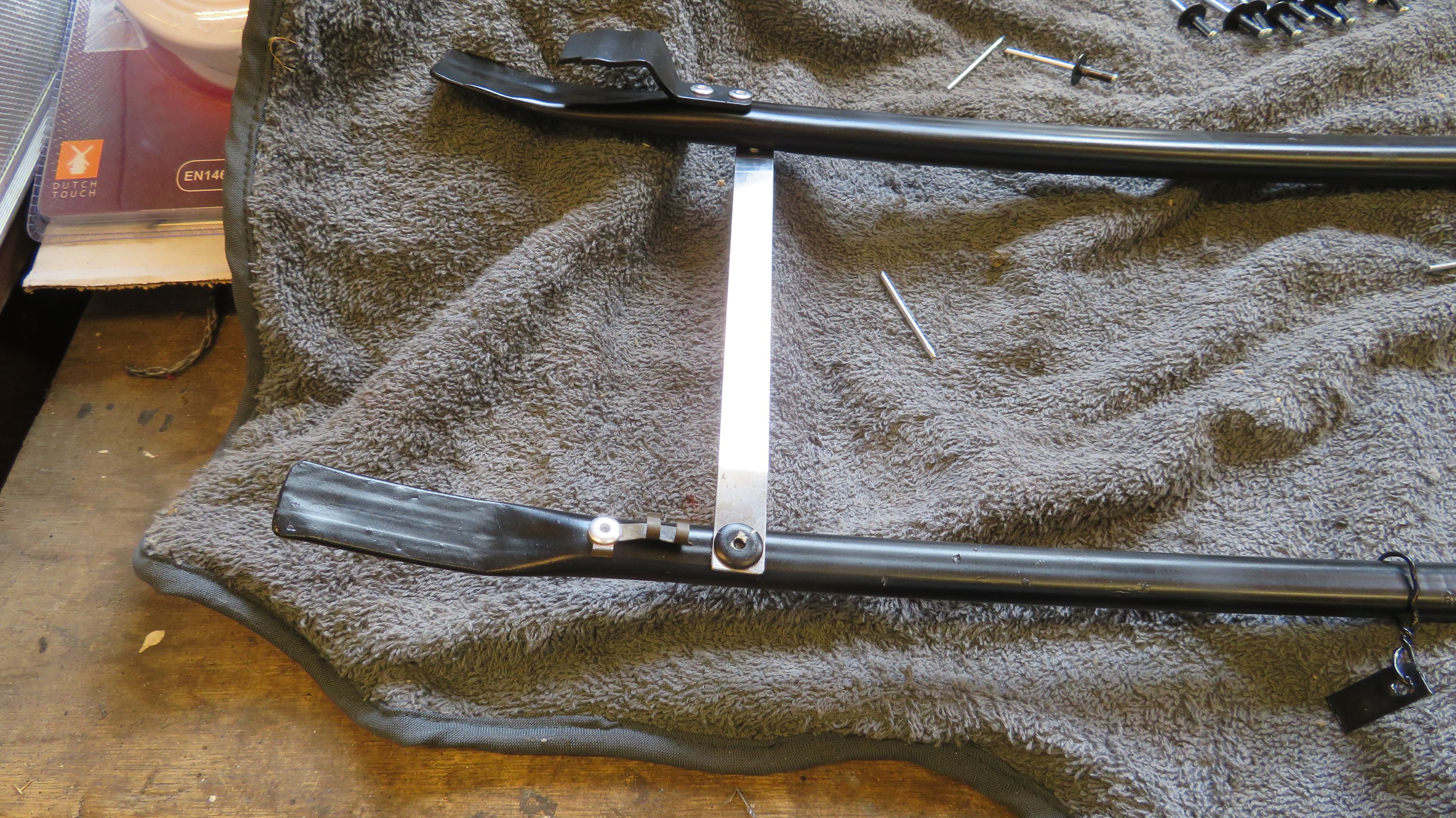 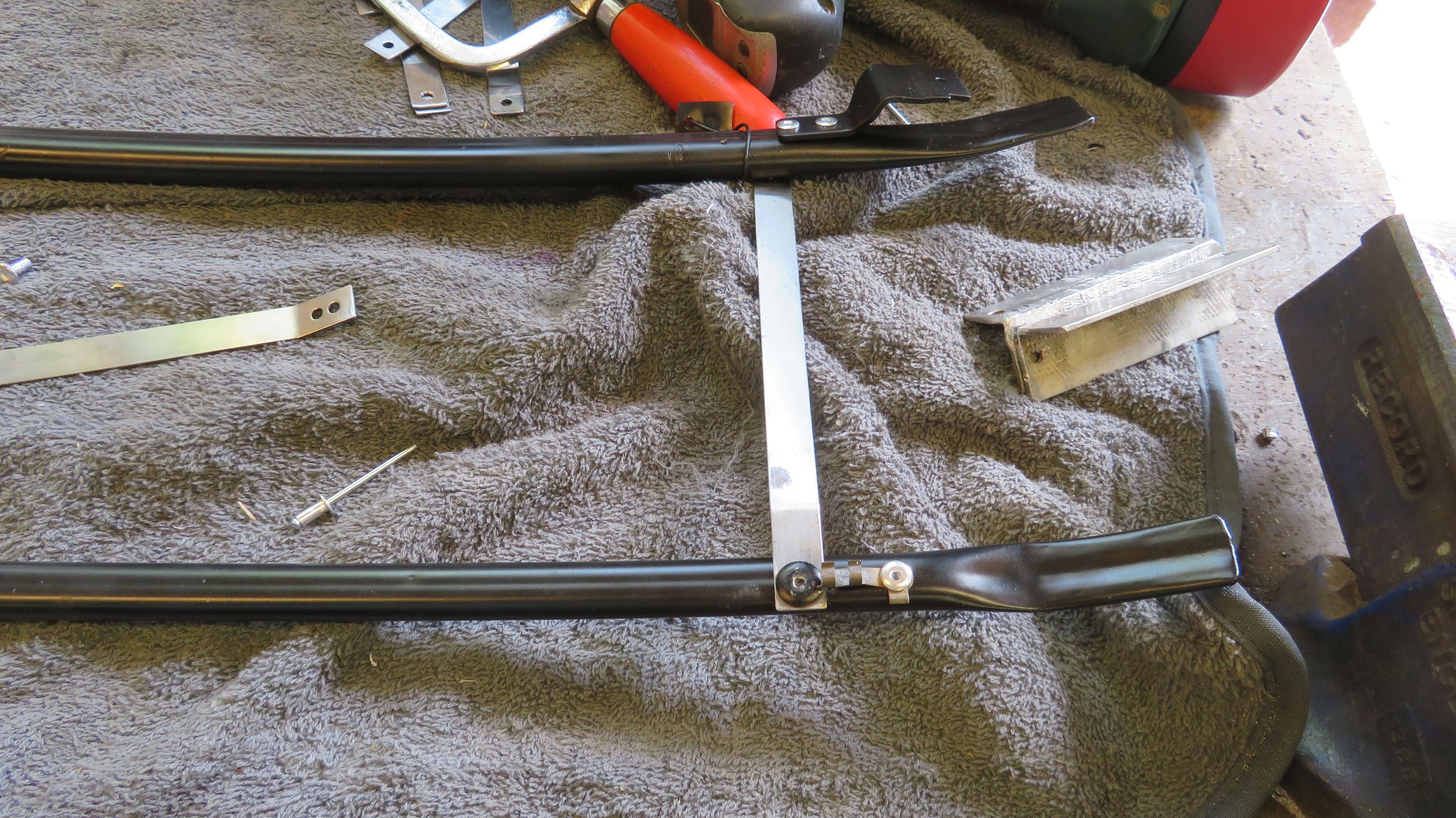 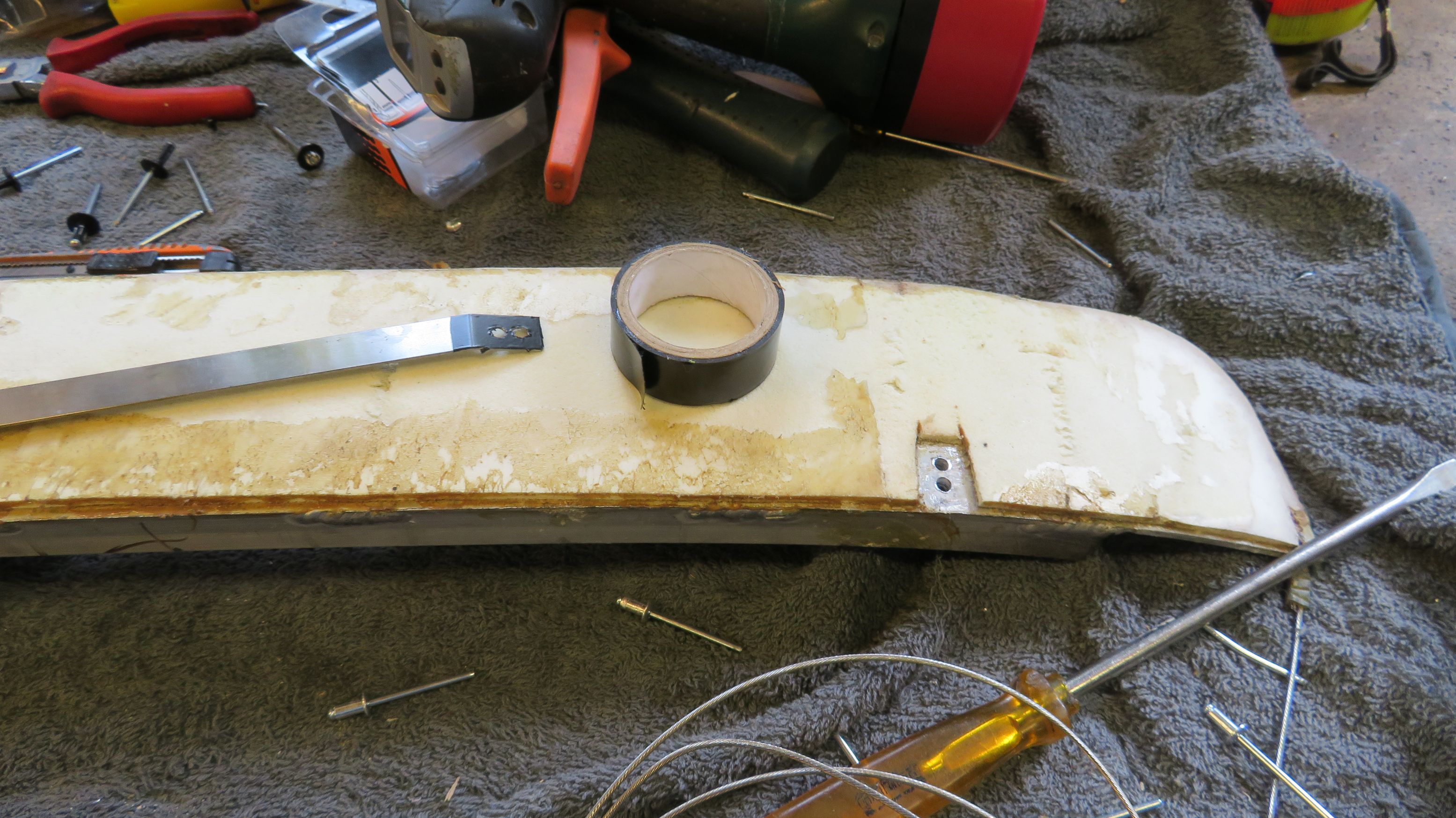 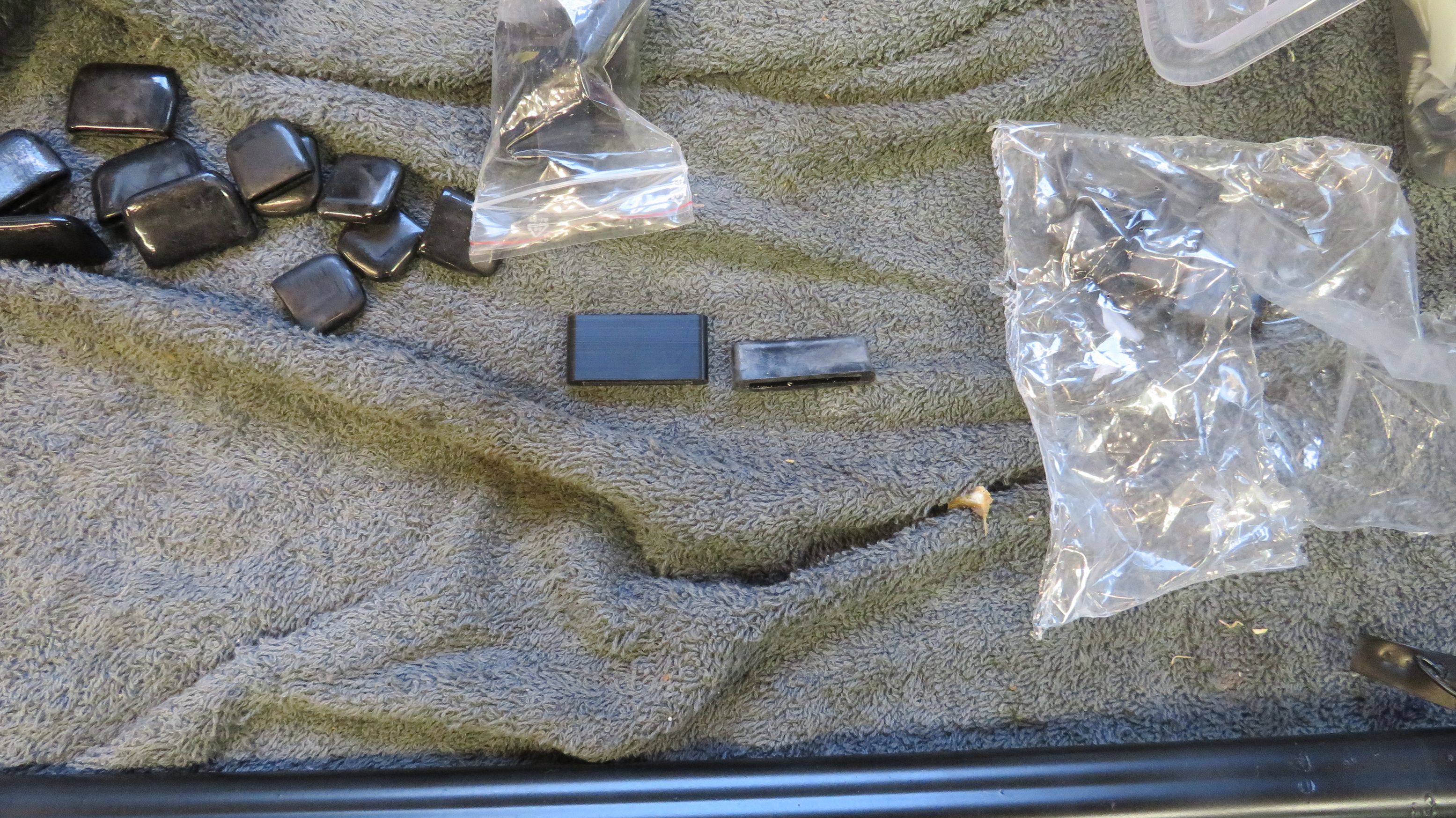 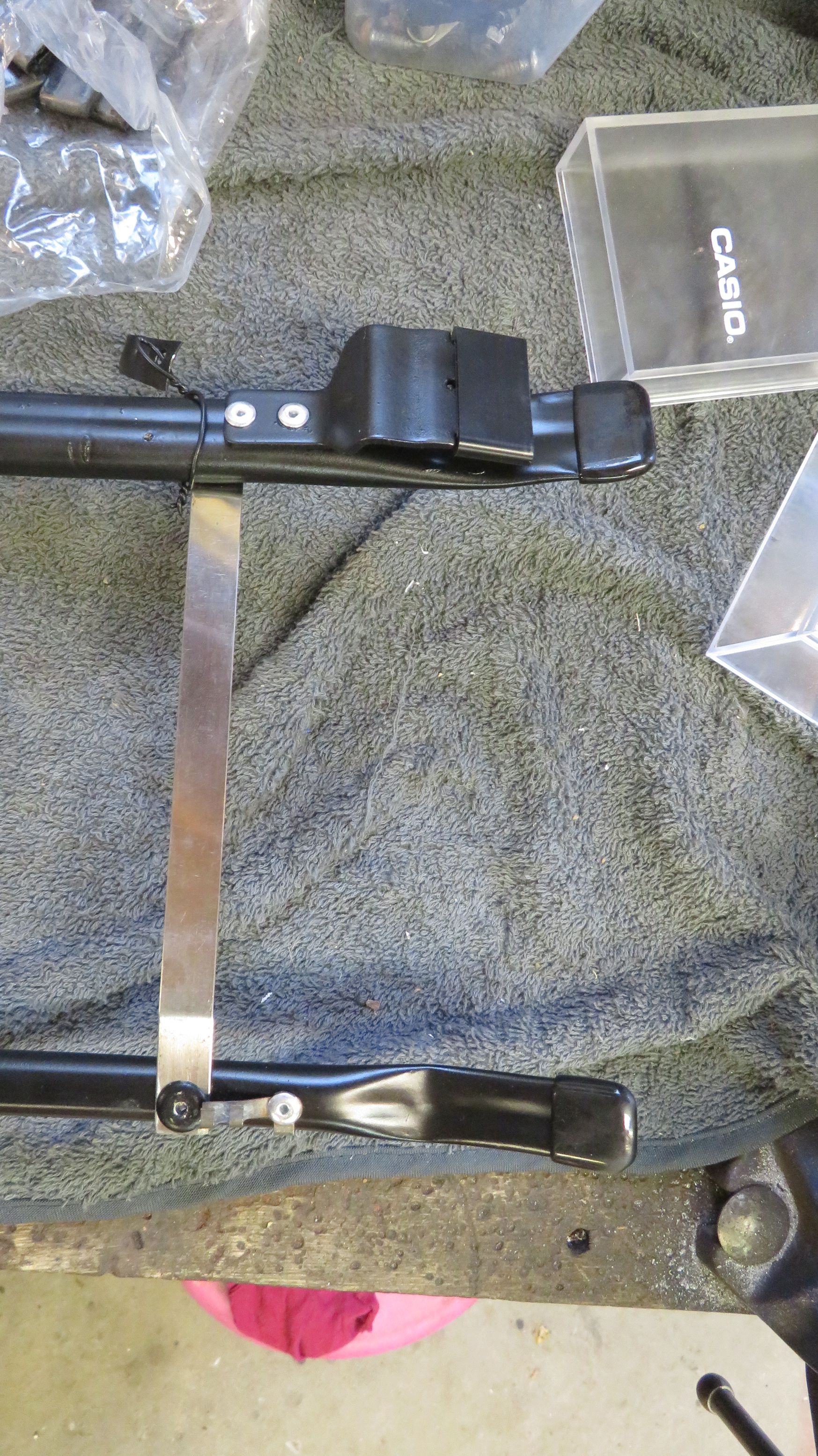 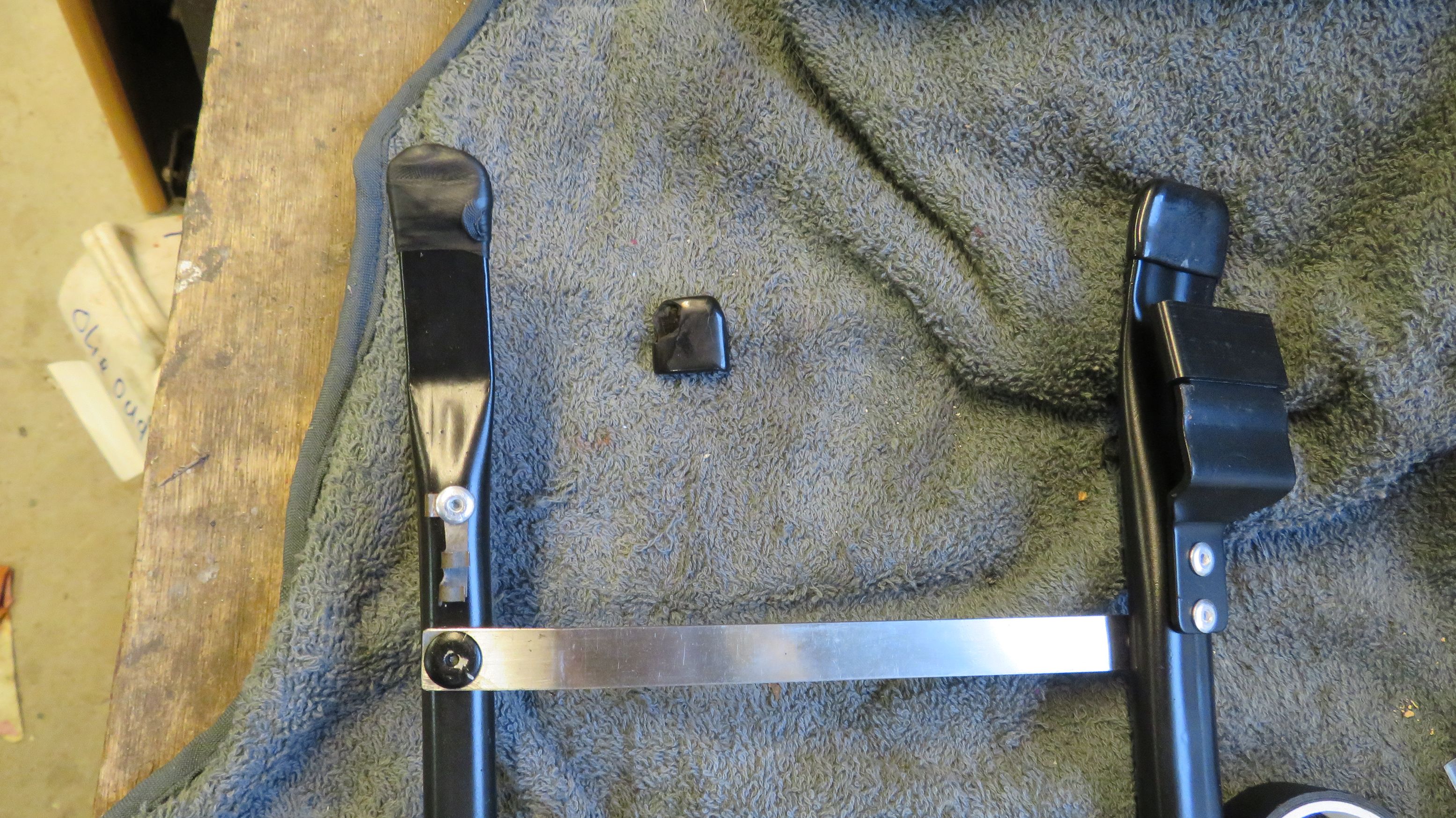 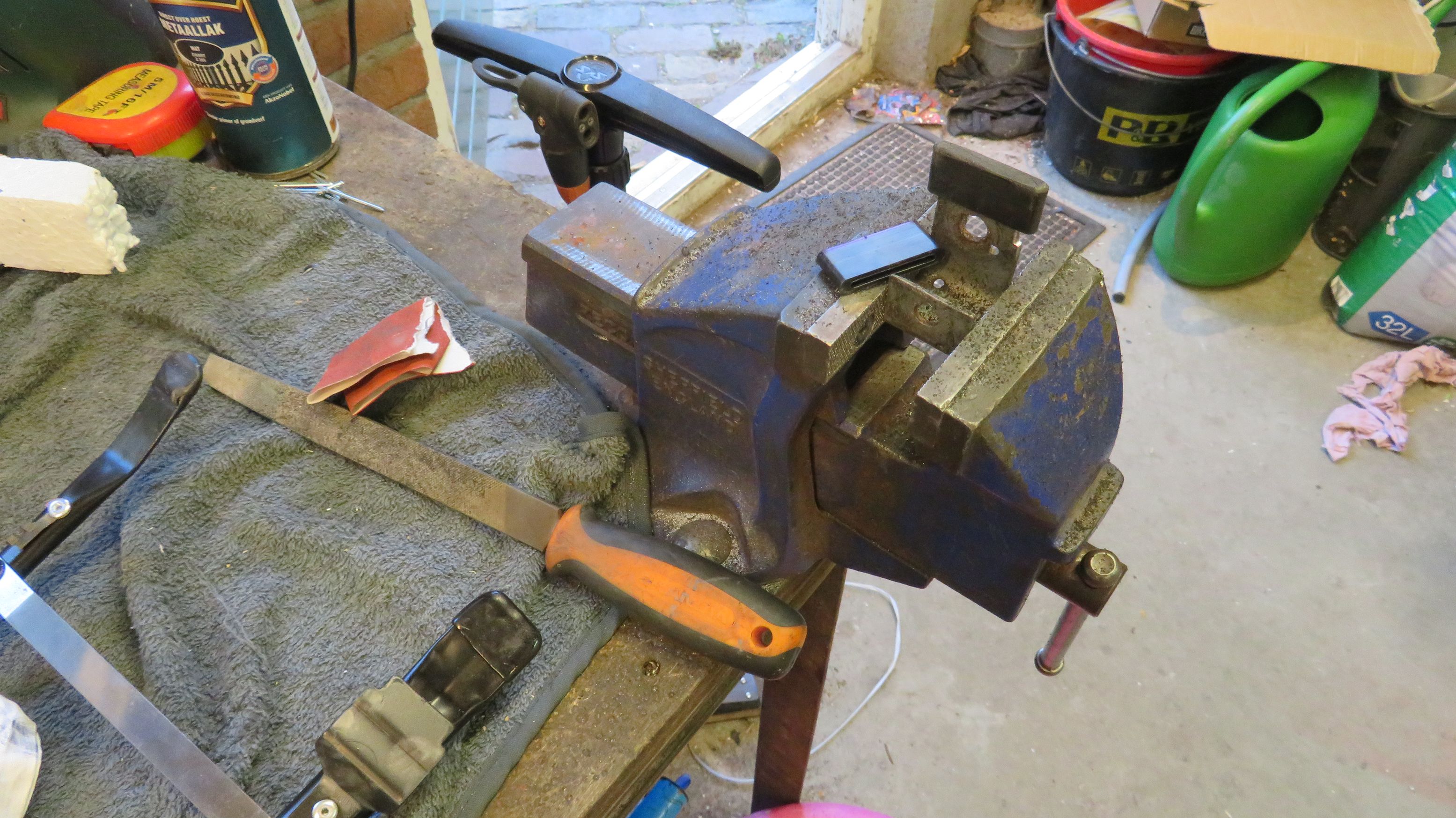 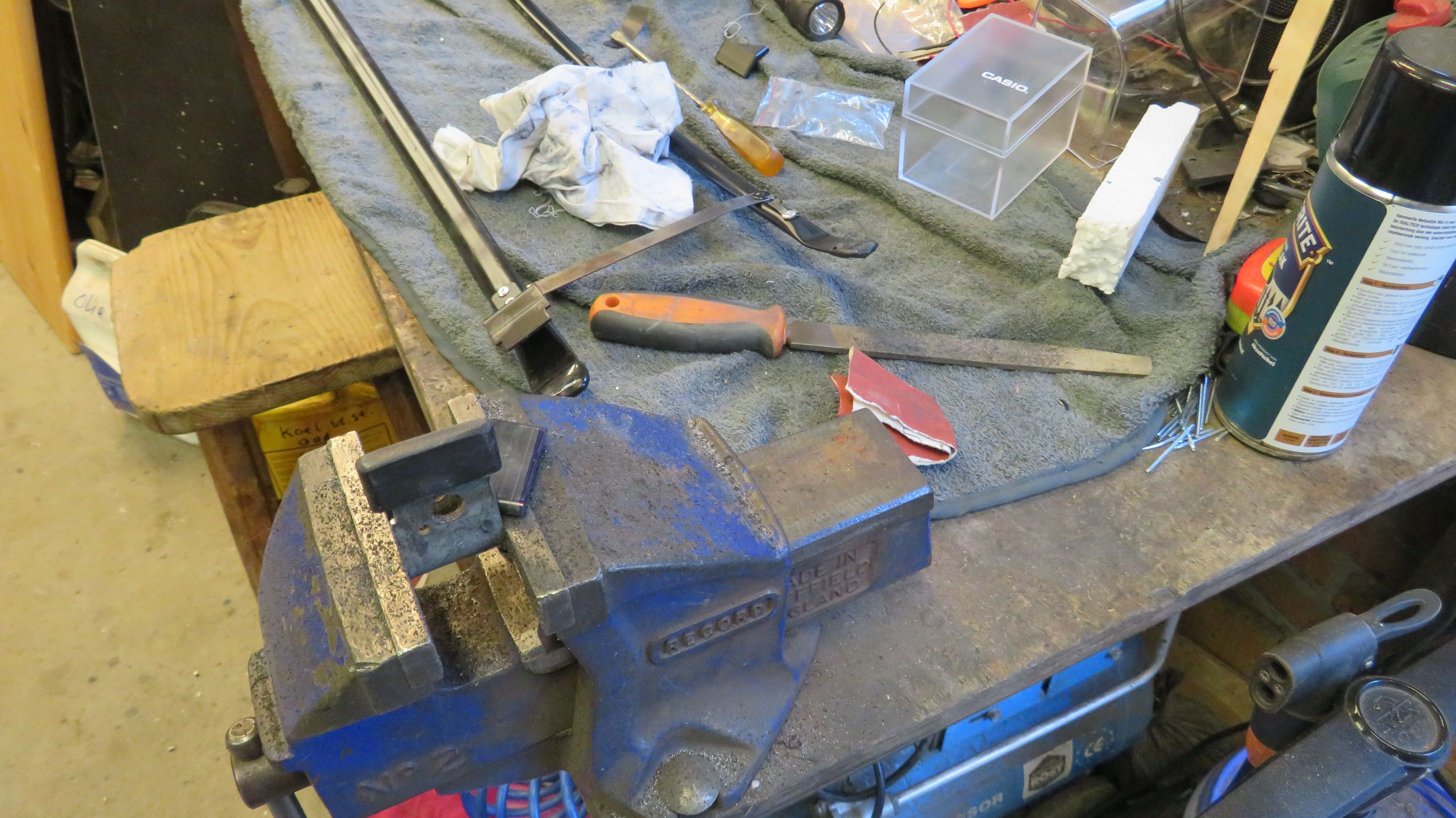 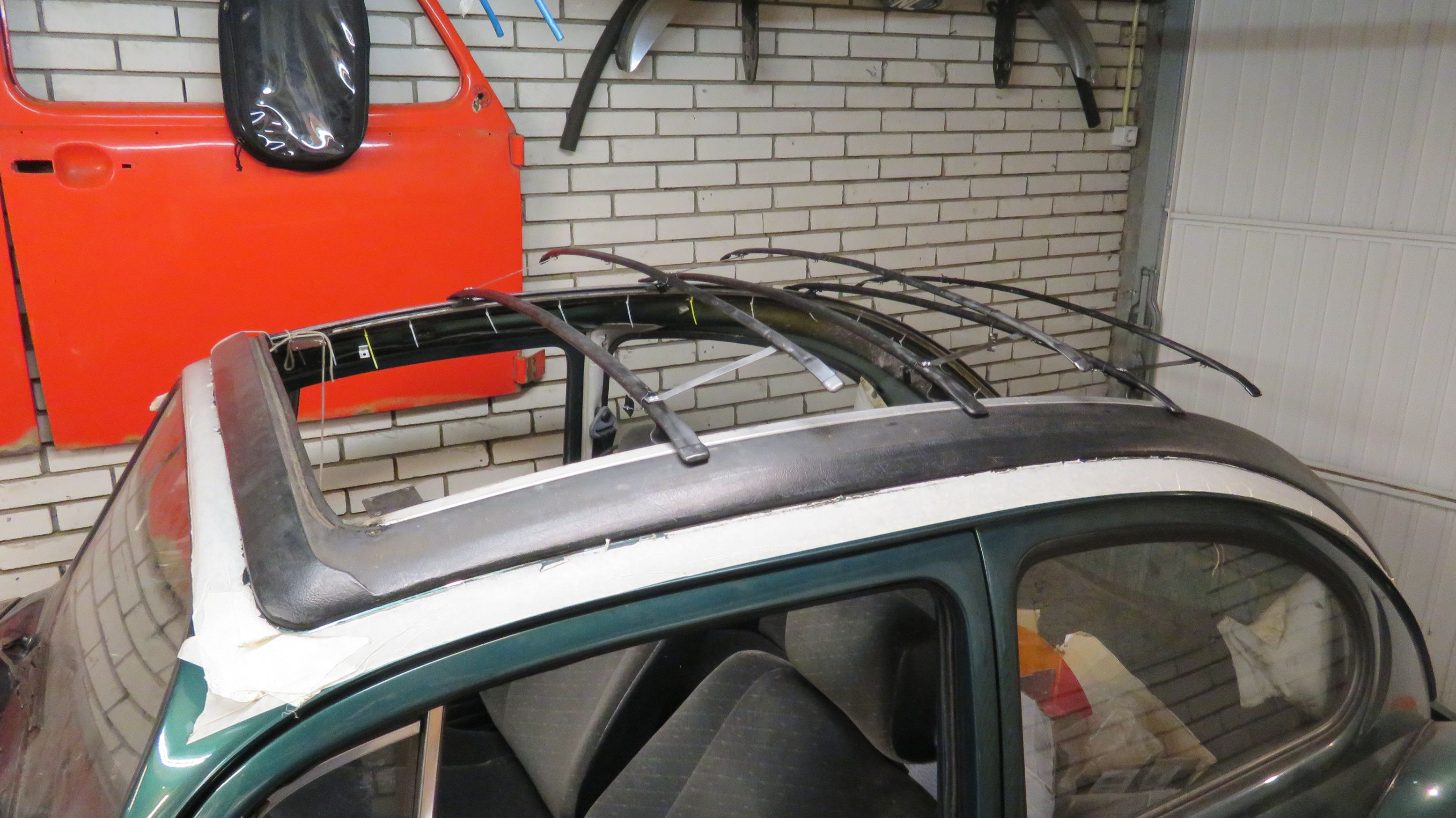 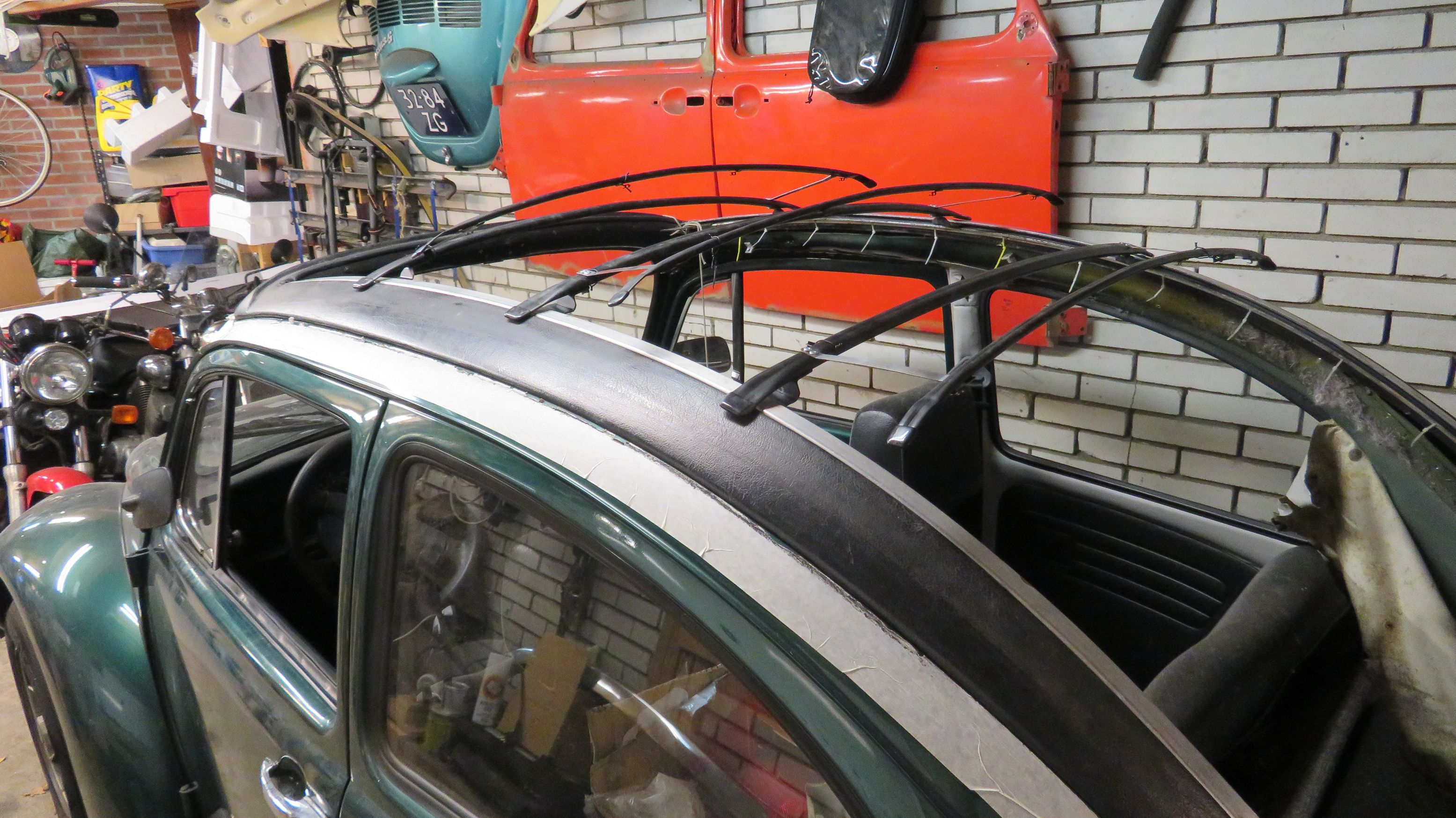 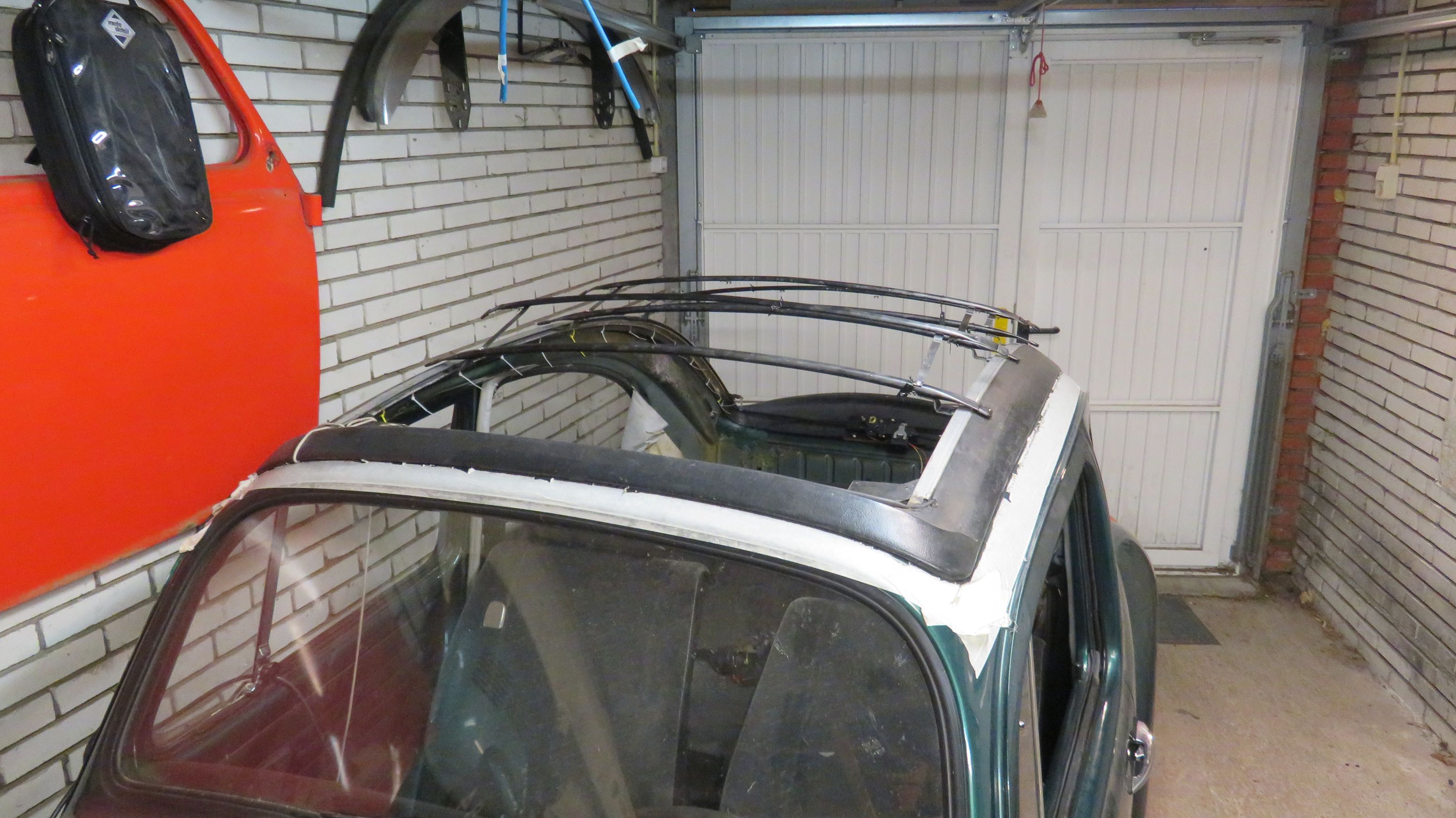 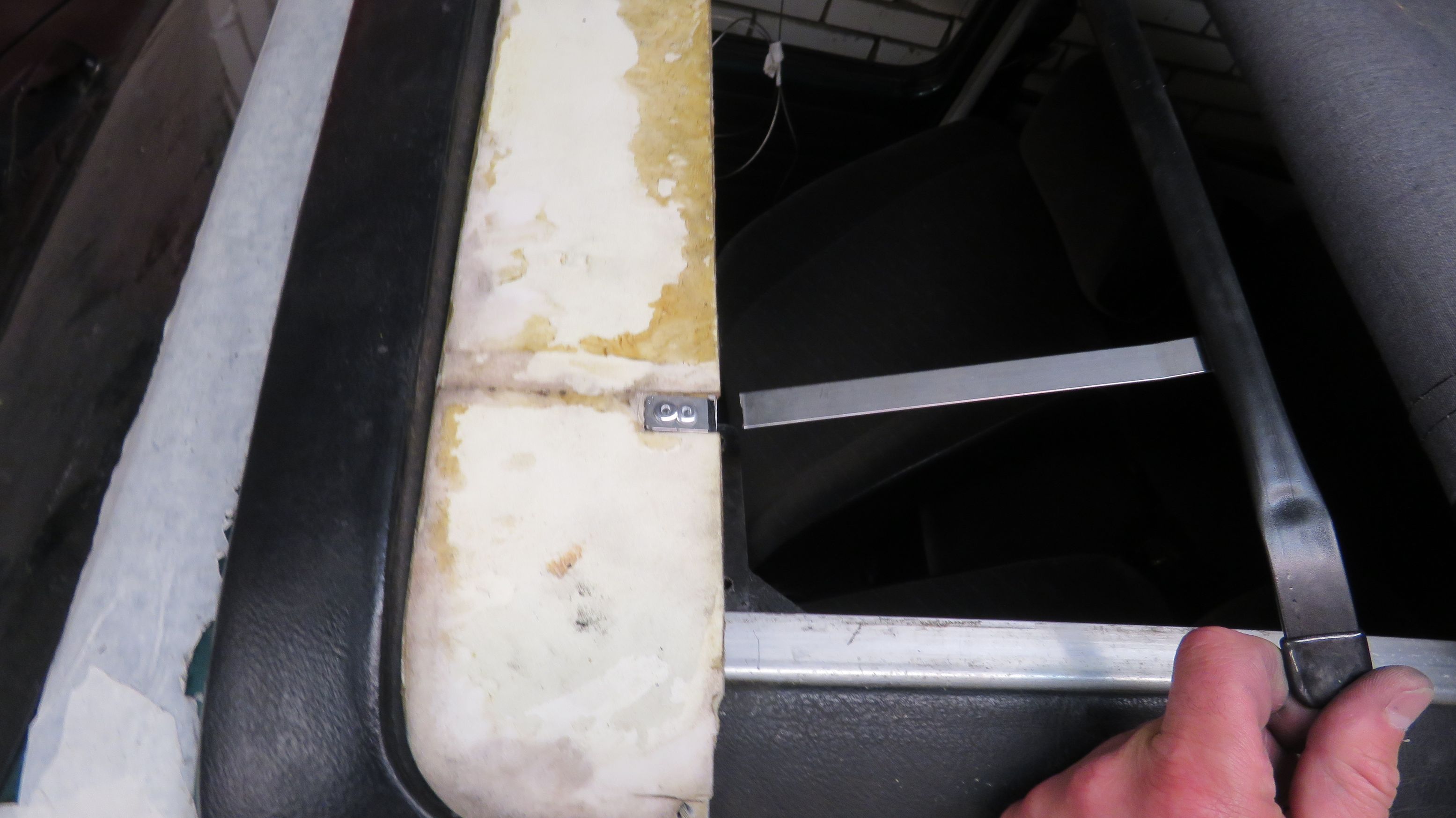 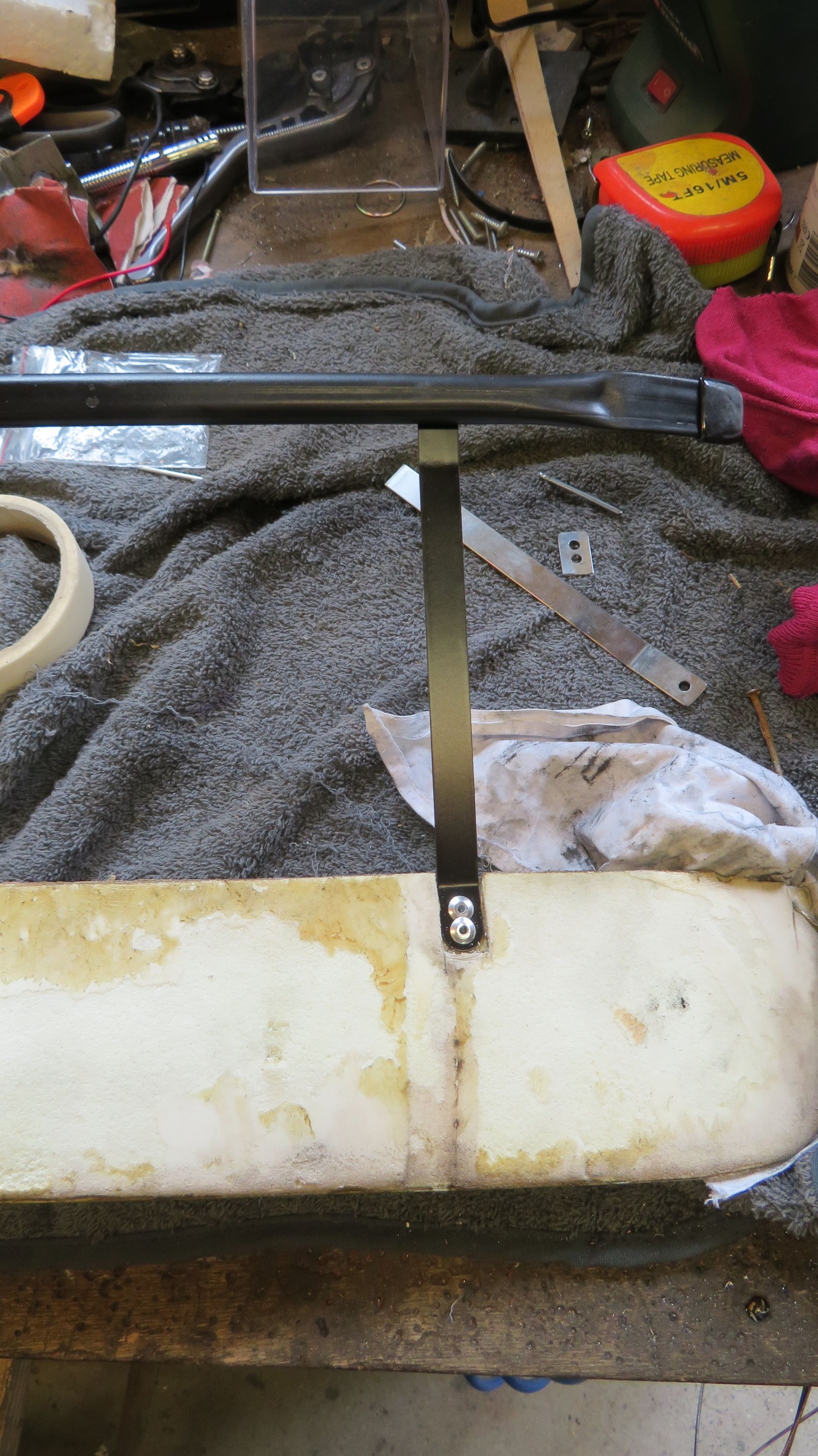 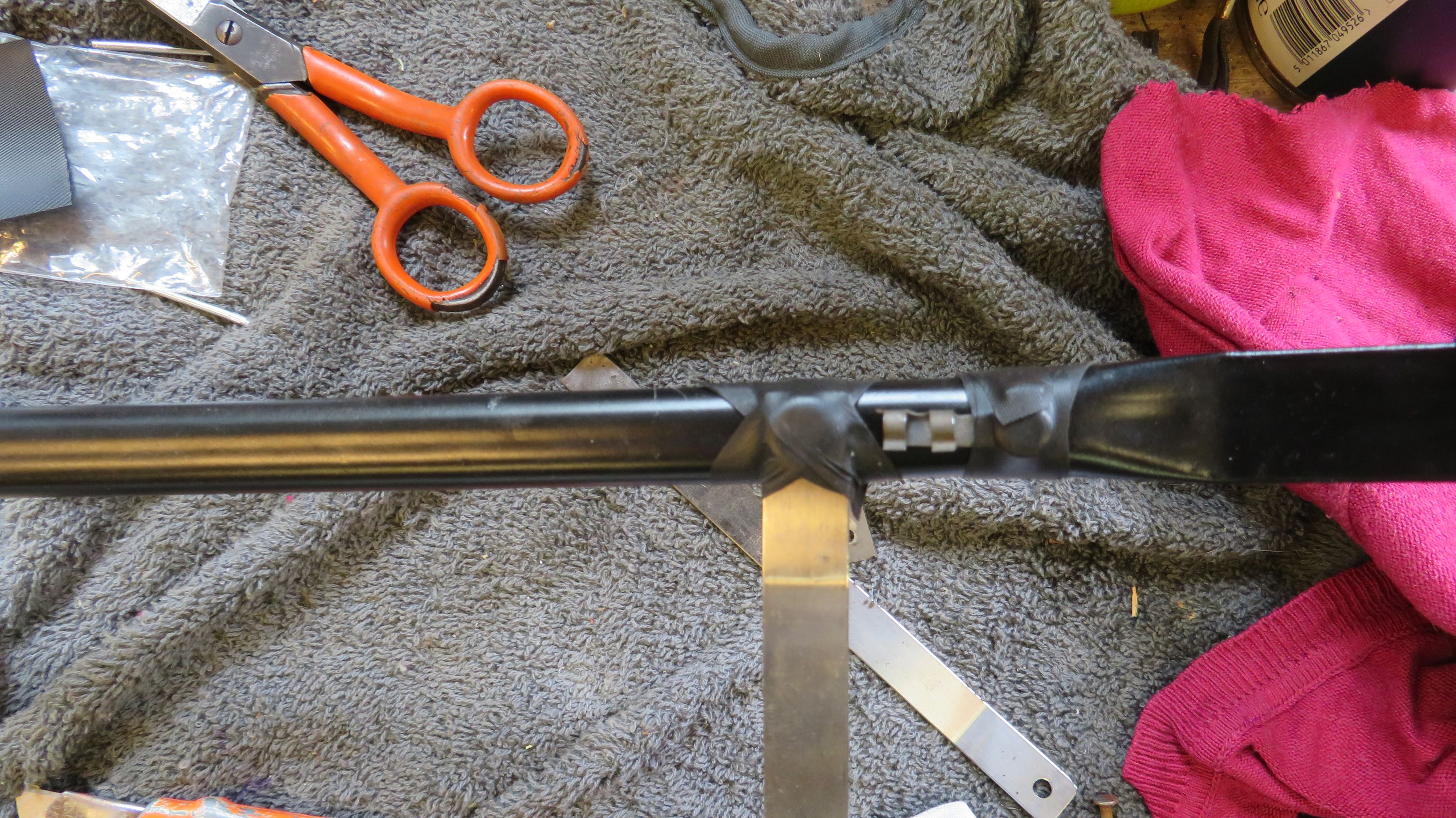 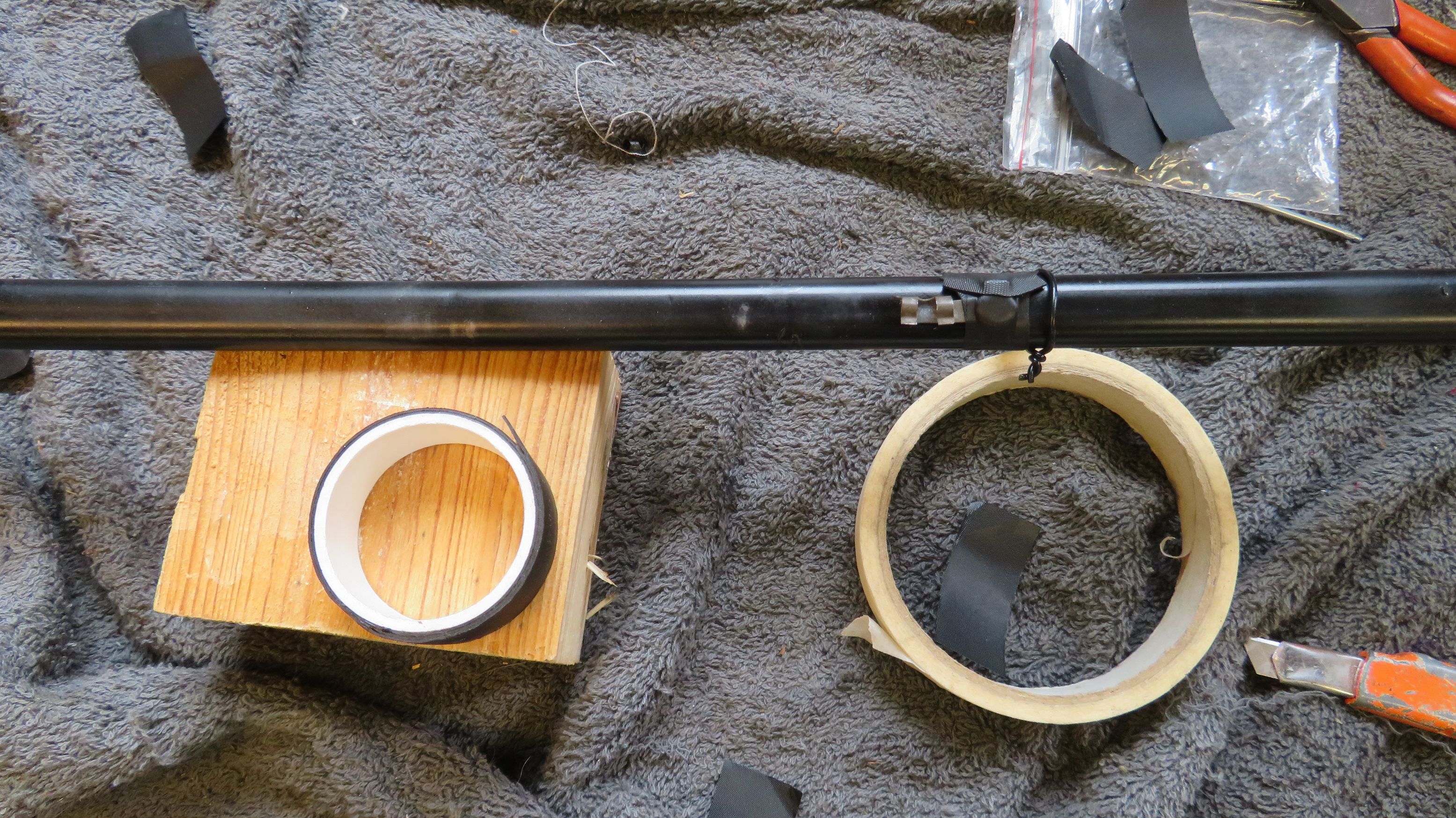 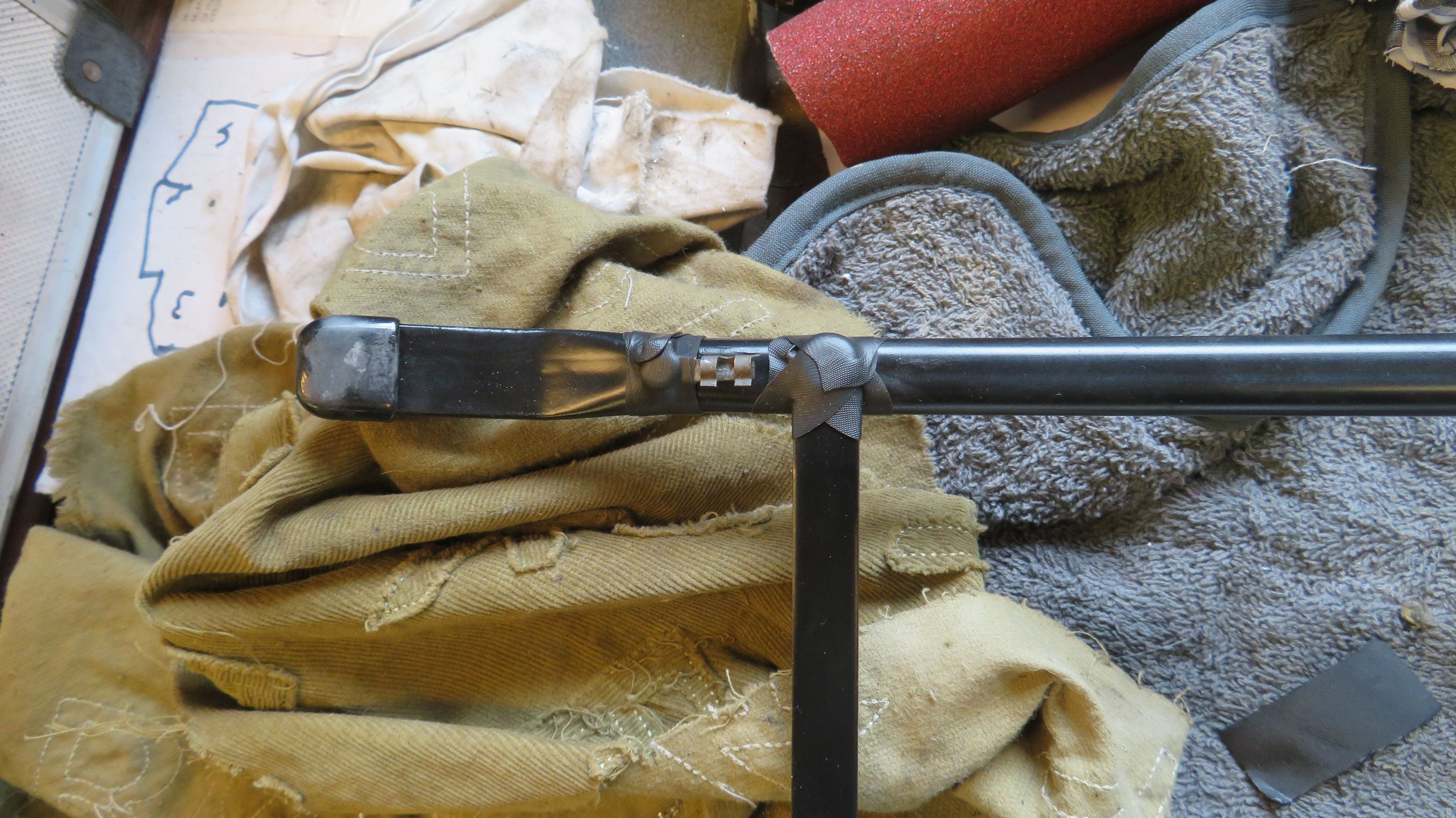