I finally got around to cleaning the engine. I don’t like cleaning ( I haven’t washed my beetle in more than a year or so…) so it is a functional cleaning. This means, I’d have to get all the grease and dirt of, but I don’t aim for an engine that looks like it just came out of the factory. It will get dirty again when it’s mounted in my beetle. 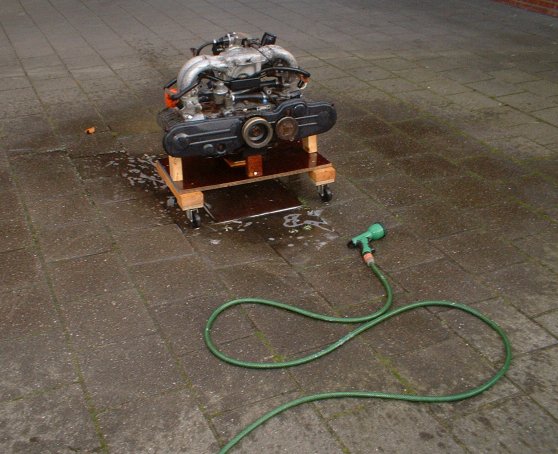 As you can see I removed the alternator, starter and wiring for this job. I also taped all the openings so the water couldn’t get in. I then sprayed on engine-degreaser and washed it all of with water.
I discovered that the engine case is made of iron, and not of alumium, like I thought it was. So it might be a bit heavier than I thought. The heads are made of alumium. The engine case was painted grey, but the paint is gone in certain areas revealing rust. That’s a pitty…but hey….I’m not gonna take the engine apart to paint it. Once it’s operational and the engine gets warm regulary the rust won’t be such a problem. This is the before picture: Before