Luckily the throw of a beetle gas pedal is the same as the one of a Alfa 33. Both pull the cable 32 millimeters back. Because the beetle cable is to short to reach the Alfa throttle body, I decided to use a piece of the Alfa cable and connect that to the beetle cable. I had to make a bracket, this was the idea:

This is how it turned out: 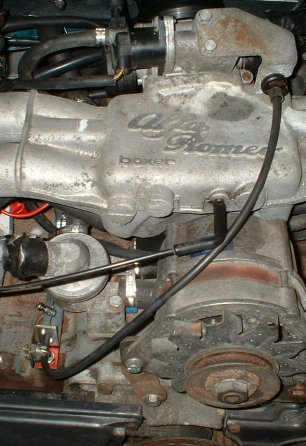 On the front of the bracket I clamped the Alfa cable to the bracket with a clamp that’s normally used for (thick) steel cables. There it’s holding the outer cable in place. 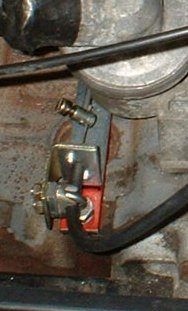 The two inner cables are clamped together with the thing you normally attach the beetle cable to the (beetle) carburetter. I just had to widen the hole so the alfa and the (thick end of the) beetle cable both fitted.

When I tested it, I noticed that the throttle doesn’t go entirely back. Sometimes it still needs to go a few millimeters back to get to complete closed throttle. Apperently the spring in the throttle body is not as strong as the spring of a beetle carburatter. I’m going to try to solve this by eliminating the spring in the gas pedal. In the pedal there’s a spring that pushes the pedal forward. The throttle body spring has to work against that spring, so removing it might help.
And I want to paint the bracket.

edit 05-07-2006: I disabled the gas pedal spring, and now the throttle returns completely! So it seems to work.
I painted the bracket, 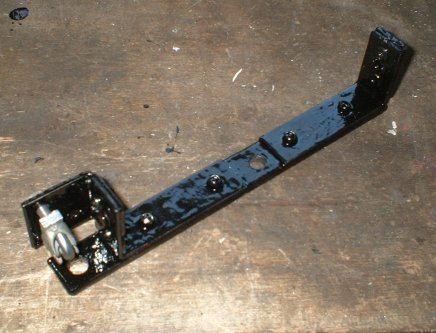 Normally the bracket for the powered steering pump is in this place, but I can’t use that on my beetle. 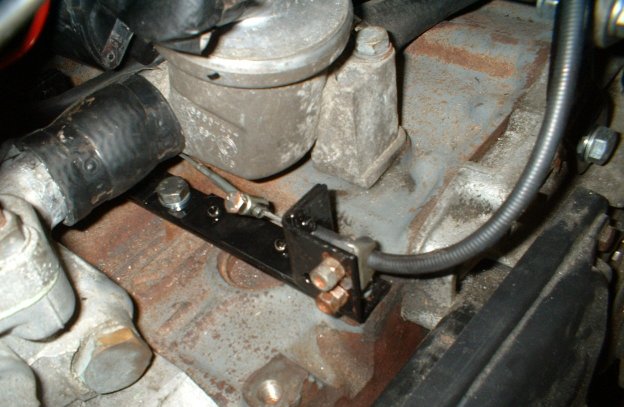 edit 19-08-2007: The throttle cable didn’t return entirely. I placed a spring in the beetle-cable alfa-cable connector:

This spring comes from a standard beetle carburettor. Now the throttle returns properly, but the throttle is now a bit harder to push. That takes some getting used to, but it’s not too hard.