In the headlights (in european cars) there are two small 4 watt bulbs, below the low/high beam bulb. They are always on when the lights are switched on. They don’t do much, but they have to be there because of safety inspection and you could use them when you park your car on a dark street.
I bought some 8 mm 1200 mcd (1.2 times a candle light) LEDs with 180 degree projection angle and soldered them (just like the ones above) to a empty bulb housing. 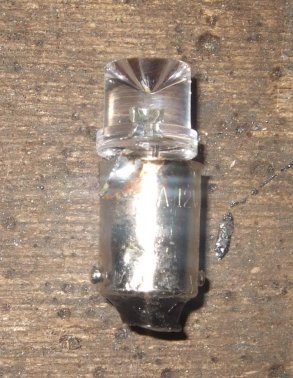 These LEDs have a totally different “bulb”, because they have to project 180 degrees.

The left one is a original bulb, the right one is the LED. As you can see the LED is a lot more white. These LEDs are 3500K nm and called “warm light” LED, because they are a bit more “yellow” than standard LEDs. In the picture it looks like the left one is much brighter then the right. In reality they are both about the same brightness. It’s very hard to take a representative picture when you’re pointing the camera into the headlights.. This is only city lights, the halogen low beam ligths aren’t on.