The pocket in which the first bow sits was too large, I had to cut it down, to be able to glue it in. I’ve cut the side a bit, so the screws for the front bow brackets can be accessed.
I also cut a strip of the front “flap” so it fitted nicely on the lip of the bow. I didn’t get the bow lip all the way in the front, against the seam, there was still about 2 mm space.
But after a test fit on the roof frame it turned out it fitted the front “spoiler” part of the frame perfectly. So glued it in like this.

I also put glue in the sides of the front lip, the front corners of the roof.
The glue I used was the stuff DecoHaus Peter recommended, Bostik 1513, which I ordered on German Ebay.
This glue has to be applied to both sides, let it dry for 10 to 15 minutes, and then put together.
And when put together, there is no adjustment possible, when stuck together, it’s stuck together.

I applied glue to the inside of the front flap (holding it open with clamps) and to the bow lip. I also put glue in the left and right corners on the lip and the inside of the front flap.
After 10 minutes, I first stuck the front flap to the bow lip, and then handled the corners.
The corners take some care, first you have to place the roof edge on the corner (on the left and right side of the roof) in the right position, before putting the flap and lip corner together.
That part of the roof edge will not be pushed down by the cable, because the cable attaches to the end of the lip.
So you will have to get the edge in the right angle (approximately the same as the cabled edge will be when finished) and then stick the roof flap to the bow lip edge.
Hmmm…it’s had to describe this, but I hope you understand what I mean.

Anyway I hope I got it right, I will know when I put the roof on the frame.

Next I glued the rest of the bows to the roof. Actually, the bows are not really glued to the roof, but the flaps are glued together around the bows.
I used (white) electrical tape to hold one side to the bow, put glue to the outside (a bit from the edge), and then also put glue on the inside of the other flap.
Then after 10 minutes I put the sides together.
The trick here is to glue these flaps togehter without glueing them to the bow. It was like that on the original roof too, so I did the same.
It think it’s for allowing some left/right movement.

Next job is installing the bows (with the roof) in the frame, and then glue the rear bow to the roof.
That flap has got the soft side of the velcro attached to the oustide for attaching the headliner.
This last bow has some movement built in the brackets, so this bow can be glued directly to the roof. 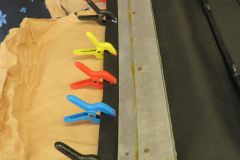 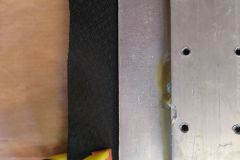 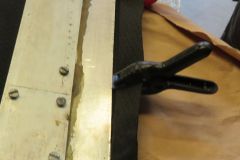 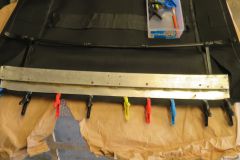 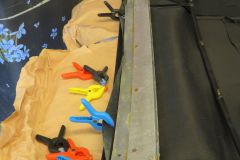 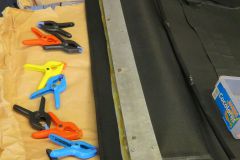 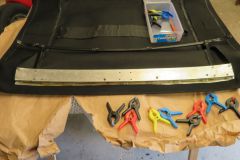 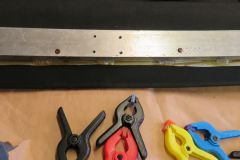 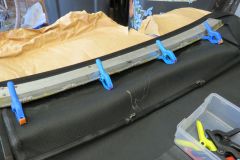 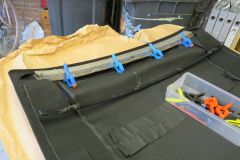 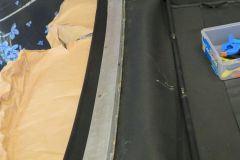 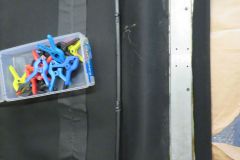 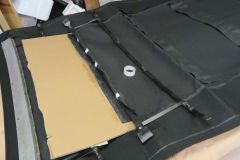 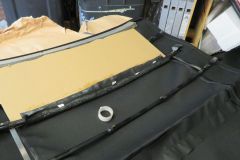 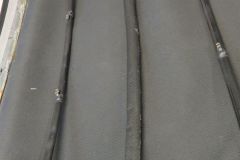 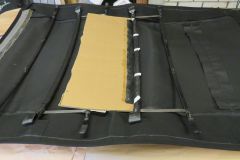 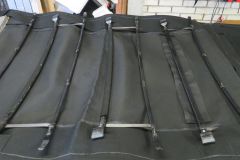 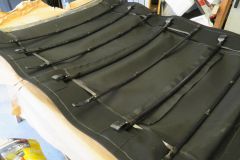 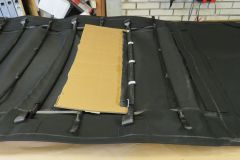 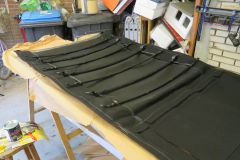