We bought a new headliner from Decohaus. At first we wanted to create on ourselfs, but we didn’t get around to do it, and it was hard to get the right material for it.
The color we chose was black, because it will match the area around the rear window better (in the replacement roof it’s black, in the original roof it was white).
And the white headliner looked pretty dirty, probably because it’s near the greased rails the roofs slides through.
Furthermore, a white roof would have made our plastic side pieces look even more beige.

First I checked if the foam pieces where in good condition. The rear triangles (these were installed on the last bow above the rear window) were in great shape.
I did include a picture of the measurements of the foam pieces, in case yours are perished.

While driving without headliner, we heard a noise coming from the roof hitting the bows because of the air flowing over the roof.
So we decided to glue some soft material to the pusher bows, so silence the sound.
We used the soft side of velcro, 2.5 cm wide, as long as the bow’s inside.

We used the same glue as the glue used for glueing the roof to the roof frame.
Smeared it on the back of the velcro and the top of the bow, wait 10 minutes and then apply the velcro to the bow.
It’s handy to have the roof slightly open to create room to get the velcro on top of the bow. And we used clamps to hold the bow to the car.
We also protected the interior from getting glue on it with old rags.
At the last bow we also glued the triangular foam pieces to the last bow above the rear window.

To be able the drive the car without headliner, we cut of the front of the old headliner, so the front seal can be installed.
Otherwise the front would not be sealed and let driving air or water in.
I removed the old piece of headliner, and discovered there was a line drawn at the point the headliner was folded over the metal piece that holds the headliner at the front, and the front seal.
The new headliner also had that line, and it measure at the same distance, about 19.5 cm.
BTW, “Vorne” is german for “Front”.
I also measured the rear and in between bows. I did not really needed to do that, but compared to the distance between the bows in the car, it all checked out.

The rods in the old headliner where hold on to the bow clips with bailing wire (it’s visible in the other pictures, when I removed the headliner). But the ends of the wires were quite sharp and damaged the roof.
So I didn’t want to use wire, and decided to use small tie wraps in stead.
As a test I used it on the old headliner, and it seemed to work fine.

Then I also pushed rods through headliner channels.
Let it dry for a day, then I installed the headliner in the car.

Installing
I screwed the front piece to the front bow of the roof, and let the rest of the headliner hang down.
Then working from the front to back, I pushed the headliner rod into the bow clamps, pierced a hole just below the clamp for the tie wrap.
Be carefull not to put a hole in the roof material by accident! Open the roof a little, so you have reach over the bow to the backside of the clamps.
Pushed a small tie wrap through the hole, and tied the rod to the clip with it. Then dlipped of the end of the tie wrap flush, so no sharp edges.
Do this for all 4 clamps, and all 4 bows.

At the rear I attached the rear to the last bow above the rear window with velcro. The new roof had velcro there to attach the headliner to it.
On the sides there are velcro flap to attach to. 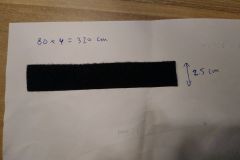 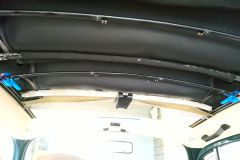 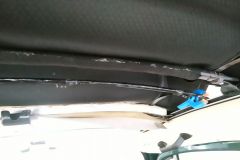 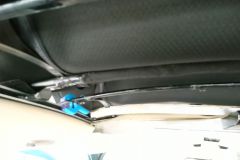 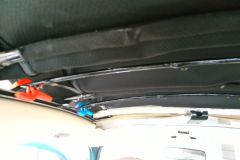