Removing the frame from the car was a task I wasn’t looking forward to. I am afraid to damage it. I am doing it very slow and cautiously.

First I searched around for some sort of plastic knife to cut through the sealant holding the frame to the roof. But I didn’t really find anything. Then I tried my luck at the local home improvement shop, the glue/sealant section.

And I found a “multi tool” from the “Bison” brand. It’s a plastic tool normally meant for removing silicon sealant from bathrooms and kitchens.
It has a nice hook on it, for hooking into the sealant.
However, the point of the hook was too thick.

But I used a metal file to flatten the hook, and after that I could get it between the frame and the car and remove the flue.
It’s handy, and it works reasonably well. But it still takes a lot of force and time. In a small afternoon I did about half of the left side.
When I removed about 30 cm, I could push one of my plastic interior levers (those things are very handy, and cheap on eBay, btw!) into it, and I noticed that part was pretty free from the car.

The frame feels pretty tough when handling it. It’s definitely made out of glass fiber, which you can feel, it can handle a bit of force. Still I am cautious not to damage the edge of the frame.

Working with the plastic knif is very slow, but then I remembered a discussion with my neighbour and he suggested using a piece of string inserted under the frame to cut through the sealant.
I didn’t have any string (nylon?) around, but I did have a lot of plastic bands that are normally used to bind stuff together.

My daughters have a folder district (I don’t know if this is the right translation, they deliver advertising brochures to houses in a certain area), as a little side job. They earn a bit of money with it, they can spend the way they like.
Anyway…. these brochures are bound together in packs with these plastic(or nylon?) bands. These are very strong, and they are flat.
I’ve included a picture of the packs of brochures with the bands still around them.
Those bands turned out to be quite good for slicing through the sealant.
I inserted the band between the roof and the frame, and pulled it through on the inside. Pulling it through was sometimes pretty difficult because the room between the cut roof and the frame was sometimes very small.

Then I applied a sawing action to cut through the sealant. I could do about 30 cm’s at a time before the band broke and I had to insert a new one. The sharp edge of the cut roof wore the band out pretty fast.
But it was a lot faster then using the knife. Also, after the whole frame was off, I could see that there are area’s where I wouldn’t have get to with the knife.

I think a nylon string would work too, maybe even better. Or maybe there is a special string available, which they normally use for cutting out windscreens if they get replaced. After all, the glue used to glue the frame to the roof is the same stuff. 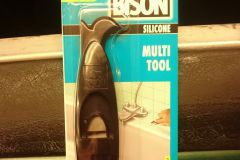 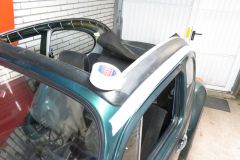 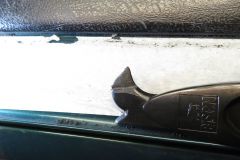 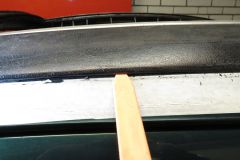 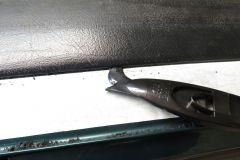 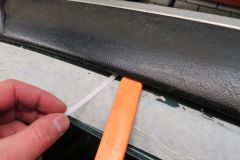 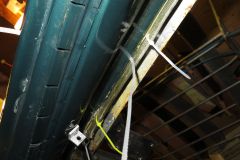 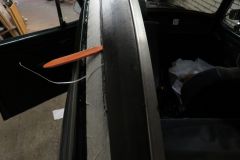 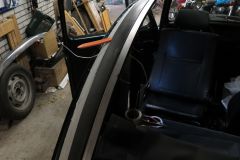 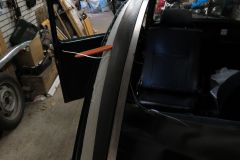 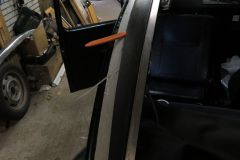 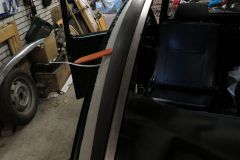 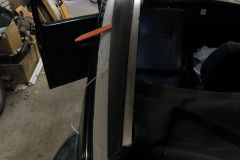 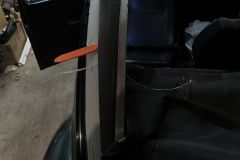 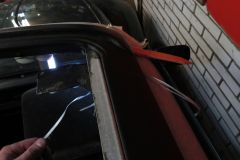 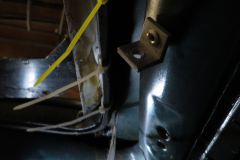 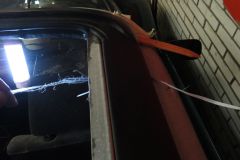