The table-frame I’ve built had some sharp edges, so I padded it with buble wrap. I didn’t want the new roof to be damaged by the table-frame.
Then I got the box with the new roof from my bedroom (finally!!) to the garage, and laid the roof on the table upside down.
To install the first bow, I first had to get the side-cables (attached to the first bow) through their channels along the sides of the roof.
I first tried pushing it through, but that didn’t work. I realized I had to get something through the channel from the other side, tie the cable to it, and then pull it back through.
After trying several things, I remembered I had a “cable-puller”. It’s a thick plastic (nylon?) cord with eyes on each end, normally used to pull electrical house wiring through their tubes.
And that worked perfectly! It had just the right thicknes to push it through the channels, the cable could be attached to the eye, after which I could just pull it back dragging the cable through the channel.

Note that the cable is out of the channel at the rear bar for a short distance. There the channel is sown together, which is why it is visible for about 10 cm. The old roof had the same construction.

Also, while working on the bows/cable I think I discovered the real purpose of these cables.
I always thought it was to make nice loops while the roof is opened, but that just a nice side benefit.
The main purpose is to pull the sides of the roof down, so they nicely lay flat against the roof frame. This seals the roof at the sides.
If the cable wasn’t there the sides will stand up, and leave a gap between the frame and the roof. This is also because of the ends of the bows, which will push the sides up a bit.
So, the cables are an essential part for closing the roof properly.

After inserting the cables, I left a bit of extra cable at the first bow end, so I had some freedom of movement to insert the first bow into the “pocket” in the front of the roof.
It took some carefull pushing and pulling, but I got it in at the end. The space to put it in is limited by the seams of the cable channels.
I first put one end in, and then pushed the other end carefuly into place.
After it was in place, I pulled the cables all the way through. 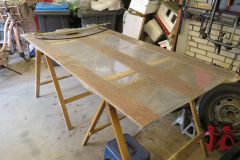 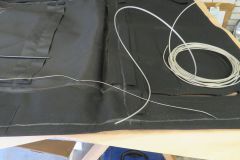 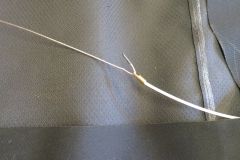 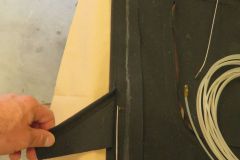 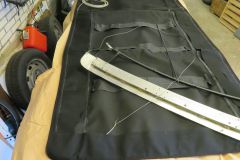 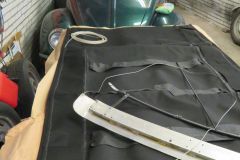 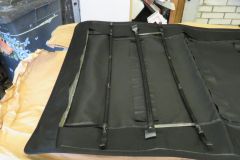