It was time for the job that frightened me the most: glueing the roof to the rear of the frame.
Doing this wrong will result in a sloppy roof when closed, or a roof that can’t be closed.
First I closed the roof entirely, and then I experimented with the roof tension by pulling the rear of the roof to get a feel for how tight it should be.
Then I opend the roof a little bit, like 1 or 2 cm’s or something, and then I made sure the roof was centered properly on the rear.
I glued the side flaps to the roof first. For this I first put some tension on the roof and clamped the folded over roof on the rear with a lot of clamps (not glued there yet!).
Then I glued the side flaps to the frame.

Next, when the side flaps were dry, I glued only the center part of the rear to the frame. Before putting the both glued parts together I made sure there was some tension on the roof. Not much tension, but enough to smooth out the roof.
After folding the roof over the edge of the frame I put a lot of clamps on it, and let it dry.

Next I located the hole for the screw in the back, and carefully cut an opening in the roof material so a screw can pass through it.
This the is the screw that is located in the middle of the frame in the rear. The original one was really difficult to remove, because it
was a flat-head screwdriver screw. And there is not enough room to unscrew it. I had to cut a hole in the old roof to get ther screw out.
To make screwing in a the screw easier I got a new screw with a an hexagon head.
I am not sure which one I eventually used, but I think it was the M5 x 30 mm, instead of the M5 x 40 mm… 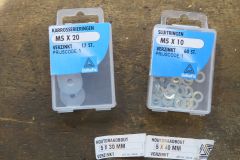 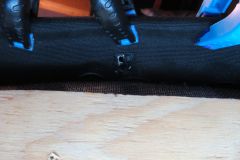 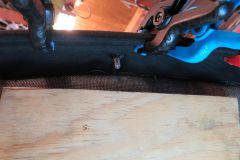 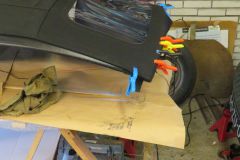 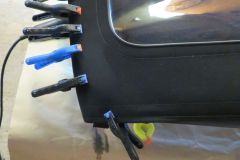 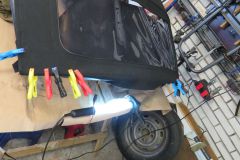 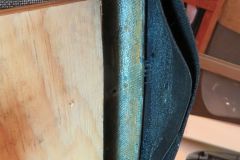 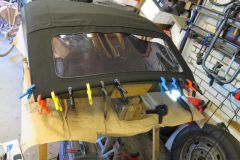 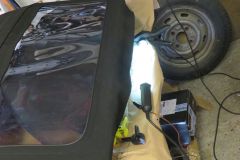