I then put the frame on the car and positioned it the way I wanted it. The old glue marks were still visible, so I used that as a guideline.
I didn’t make many pictures on this process, because I didn’t have much time at this point. The safety inspection of the car was due.
But I think I did it like this:
– attach the screw at the back, but didn’t tighten it yet
– remove all the tie-wraps that held the slider channels to the frame and replace them (one by one) with screws. Paying attention that the frame isn’t pressed against the car yet.
we need a bit room between the frame and the car where the glue has to be inserted.
Also attach the 6 brackets that pull the frame to the car, but don’t tighten them yet also.
– use masking tape around the edge of the frame and on the edge of the frame to prevent glue from attaching to it
– use tooth picks to open up the crack between the frame and the roof.

Then I used a window glue cartridge in a glue (sealant) gun, and pressed glue into the crack, removing the tooth picks as I went around the car.
Things to note:
– It was really hard to get the glue out of the cartridge. I think I needed a better quality glue gun, or even a pressed air version.
– On the rear, there is only a bit of glue on the sides. A large part in the middle doesn’t get glued, it was like this originally too.

When I had the frame glued, I went inside the beetle, and first tightend the one screw in the rear.
The I tightend all the screws that hold the slider channel to the frame.
I also tightend the brackets that pull the frame to the car. When dismantling I marked the position of each bracket with a white paint pen ( I also marked
were which one went with writings on masking tape attached to the brakets). Now I used those marks to get the same tension on the frame.

This was all done while the glue was still not hardened. I now went to the outside and cleaned up all the glue-seams as the glue was nog “bulging” outwards because
the frame was pulled to the car.
I used the sealant “knife” with also had a nicely curved end on it to “scoop” out the exces glue from the seams.

Next I removed all the masking tape, and double checked the seams if they looked allright. 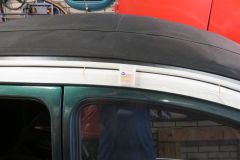 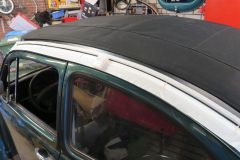 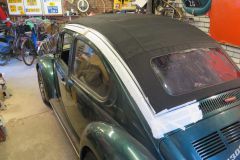 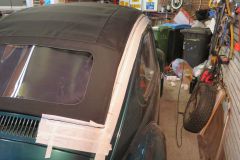 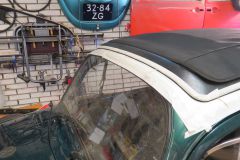 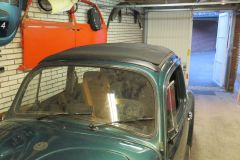 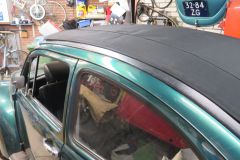 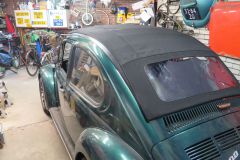 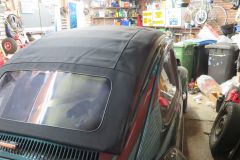 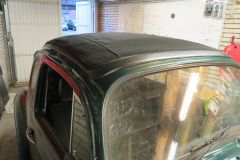 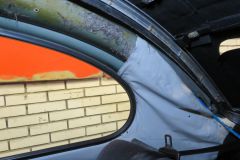 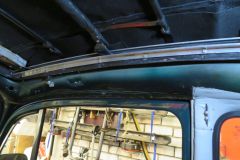 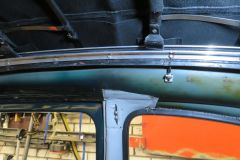 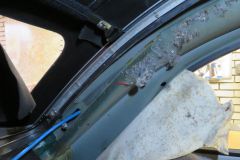 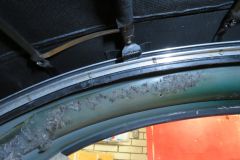 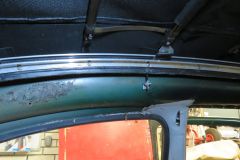 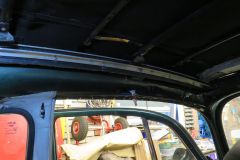 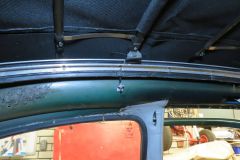