edit 25-03-2006: I wasn’t satisfied with the amount of room between the rear apron and the engine. Then somebody on the keversite.com forum suggested to file out the rear gearbox mount, so the gearbox (and thus the engine) will sit lower.
This is my rear gearbox mount:

And this is it after filing the holes for the bolts:

I won 6 millimeters with this. That may not sound like much, but as it is a really tight fit, this is a very welcome 6 millimeters.

edit 06-04-2006: I bolted the left rear fender and the rear apron back on, so I can see the results of filing out the rear mount.

The pully shows it dropped about a centimeter at the back. On the left side I have more room now. Before the rear apron touched the distribution covers, now it has about half a centimeter of space… It’s close, but it will have to do.

edit 23-09-2006: I can’t get the tripple pully of the engine. I tried with a cheater bar and it didn’t do anything! I didn’t want to put to much force on it because I blocked the flywheel with a crowbar. This meant all the force is put on the crankshaft. That can’t be good, so I left it on. But this meant I had to cut out another piece out of the rear apron: 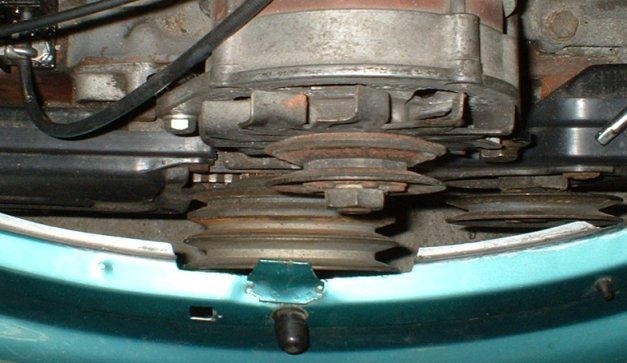